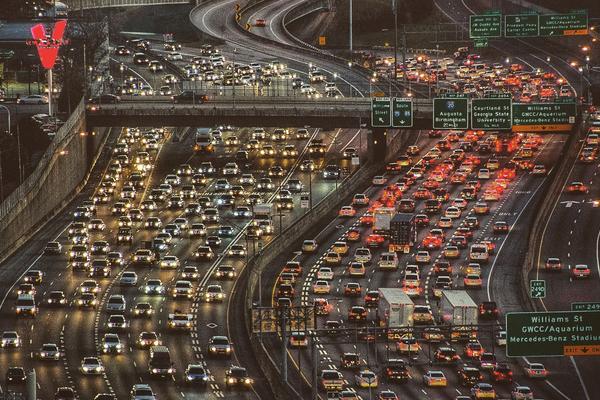 Driving your RVcan be a time for relaxing when you have nothing but the open road between you and your destination. It can also be a very stressful time when you have to drive through heavy traffic as you find in Atlanta, Georgia.

Alternate Routes to Avoid Atlanta GA: If you want to see the country and have a relaxed time driving your RV, you should try Route 129 through Macon and up to Athens as an alternative way to bypass the city. Some people drive straight through Atlanta midnight to help avoid traffic.

To learn more about different routes to take through Georgia and avoid the Atlanta traffic scene, just keep reading our article. It tracks those alternative routes so you can have a better time driving through the state.

How to Avoid Atlanta on I-75

The city of Atlanta is the home of 6 Interstates. I-75 is just one of those 6 and it is as busy as the other 5. But there are ways to avoid Atlanta when driving the I-75 north and south.

I-75 goes through the heart of the city and the best thing to do if you don’t want to face traffic is to travel the interstate after 10 a.m. and before 3 p.m. or after 7 p.m. and before 6 a.m.

If you are not inclined to do that, then you should take the exit at I-285 and go around the east or the west side of the city. Since I-285 is a ring road interstate, you will connect to the I-75 once again north or south of Atlanta.

For interstate highway travel, that would be the best route but many people feel that the I-285 is as congested as the I-75 and you may need to find some state highways to travel if you want to avoid all the traffic this city has.

The Best Route Around Atlanta 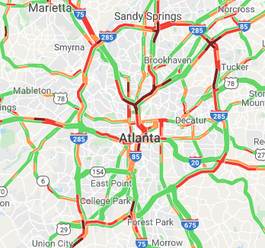 If you are into driving the Interstate system, the I-285 is the best road to go around the city. It is a ring road and connect with all the other 5 major interstates that have their routes through Atlanta.

But, Atlanta’s traffic problems have hit the I-285 as well and you need to avoid this highway during peak traffic hours. One solution would be to travel the State or County roads that bypass the city.

These routes will take you miles out of your way, but it may be a more relaxing effort and help you avoid the issues that come with driving the interstate highway system.

I-285 also connects with many of these state roads giving you a high speed option if the road is clear. There are some good routes on the State system that makes sure you get by Atlanta without any real traffic hassles and can lead you back to your preferred interstate once you get clear of the city

One of the key pieces of advice we found that came from experienced Atlanta driving RV owners was that if you want to avoid Atlanta traffic, you need to travel straight through the city around 11 p.m. to 2 a.m., give or take an hour. Most Atlantans are in bed at these hours and the I-75, according to them, is nice and clear.

If you need to use the Interstate, you can cut off 441 and use Route 83 to get to I-75 when you are on the south side of Atlanta. Other than that, you may have to be a bit creative. 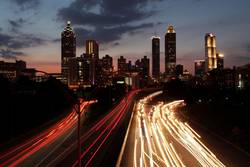 If you are new to the State of Georgia and want to travel to see your new home state, Atlanta is a tempting destination to put on your itinerary. Unfortunately, doing that would be a major mistake as Atlanta highways are not the most tourist-friendly roads in the world.

Recently, and just for Fulton County alone, there were 77 traffic deaths on those interstates. These fatalities came from over 15,500 car accident injuries. To record that many injuries, there were over 50,000 traffic accidents.

If that doesn’t make you think twice about traveling through the city, then you should know that there are about 2,000,000 cars on the I-285 every day. Yes, you read that right, 2 million cars use that road every day.

There is the Georgia 400 that is available for you to use but since the State took the toll off, it has become a very busy travel alternative. I-85 is a good alternative but that may only be once and if they have completed the HOT lane extension.

That extension is said to be able to help drain some of the traffic off the I-85 making it a better road to use. If it is not completed, then you will have a lot of construction delays to deal with if you use the I-85.

You may find US Highways 23, 29 and 123 as better alternatives when driving through the city. To navigate through the Atlanta area, it is best to take your time, slow down some and try traveling in non-peak traffic times.

Whether it is Atlanta or some other major US city, you will find that navigating through and around these geographical regions to be a nightmare. The reason for this is that everybody wants to avoid the normal city streets and get to their place of employment on time.

Driving your RV through these interstates may save you some time and fuel but the traffic headache may not be worth it. Do some research and see if there are other smaller roads that would help you avoid Atlanta and get you to where you are going quickly.

A few miles out of your way may be worth the avoiding the stress you get by traveling through the city.