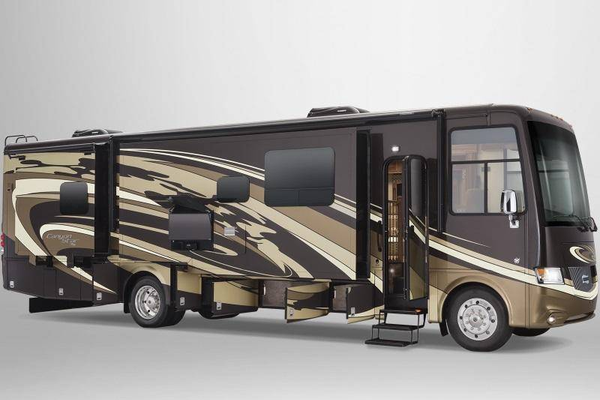 Winnebago was one RV maker that tried to make this type of RV and there may have been one or two others. You may not be able to find that many rear engine gas RVs because the concept did not catch on. It will be a hard search though.

If you do a good search, you will find some gas pushers for sale. One 2008 Itasca Winnebago is said to be very rare and is selling for about $90,000. There are used dealers that will have or say they have them but they are not a popular RV option.

To learn more about this topic and where to find one of these RVs just continue to read our article. It has the information you want to know about so you can find one if this is the RV you want. 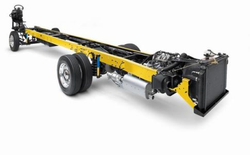 Winnebago seems to be the only RV maker that tried this motor location. They built a few in 2008 and when they did not sell, they scrapped production and as far as our research has shown, no one else picked up the ball to run with it.

The models that Winnebago made with this engine option Were the Destination, The Itasca, and the Adventurer. Those were all made in 2008 and were built on the Workhorse UFO chassis.

The models on sale at one used dealer prove that last paragraph true. Those are the only models and model years on sale at that location. One reason why they did not sell was the fact that the rear gas pusher engine was more expensive than the front gas engine.

The total number of rear gas pusher engines produced was under 100, 95 to be exact. So while seeing many at one dealer may seem like there were a lot more made, the truth is they are very rare. 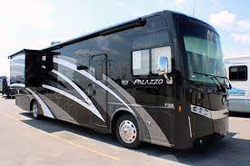 You will find some different used and new dealer ads pop up on your search for this type of motorhome. But when you click on their websites, you will find they are actually trying to sell rear diesel engine pushers.

That has been our experience and while you can find unlimited numbers of those RVs, it is very hard to find a rear gas engine pusher on sale. One dealer or should we say internet classified ad has several of the Winnebago models for sale.

They are listed by different owners from around the country and they may or may not be still available. If you are truly interested in this model of RV, you can see those RVs at this link.

The unfortunate aspect of that website is that they do not provide a lot of information about each RV. Some have a large number of pictures you can view while others don’t. But if you want the specs, you have to contact the seller to get them.

The best you get is the mileage and the length of the RV in some cases. The prices of those RVs found at that link ranged from request price to $60,000 to $90,000 approx. So you are still paying a hefty price for a 14-year-old RV.

How many of the 95 are still in existence is hard to say. Some of the gas motors had a lot of problems but no records were kept as to how many made it to the junk yard.

By the way, that was the only link that came up in our search with the rear gas engine pusher. It will be hit or miss when it comes to searching for this type of RV.

We will say that we found one person who owned and drove one of these engines. He said it was the nicest driving RV he drove before and after he purchased it.

This is going to be hard to say as so few exist and any comparisons that are being made are not including this engine option. They usually only compare diesel to gas engines.

There were design issues with these models of RV but they should have been able to figure out those issues and solve the problem. However, people were not interested in a rear gas pusher engine as they probably felt it was more economical to pay a little more and get more power and towing capacity with the diesel pusher engine.

Brands That ‘Made’ a Rear Gas Pusher Engine

During the writing of this article, we discovered that there was more than Winnebago attempting to make this style of RV. But there is more to the story than some people let on. In their posts they make it sound like these companies produced many of the rear gas engine pusher models.

But that is not the case. First the list:

We know about the Winnebago and it tried this in 3 model series with no success. Monaco and Workhorse were bought by Navistar but 2008 was a bad year for the RV industry and Navistar scrapped both companies and as far as we can tell never made one model.

Forest River announced they were going to make one, and it was supposed to be the Georgetown but no production model has ever been seen. Rexhall is also supposed to have made a model but we have found none on sale at this time.

We have seen nothing about Georgie Boy or Holiday Rambler at the time of this writing. The years these models were supposed to be made are between 2006 and 2009 but since the economic crisis of 2008, many of these RV makers may have lost a lot of money producing those options.

Rear Gas Pusher Engines Are Not a New Idea 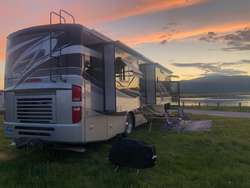 You may think that since Winnebago has the most models still standing and in working conditions, they were the first to come up with this idea. That is not so. There is a little known company from the 70s that had the idea first and built many of these rear gas engine models.

Food Machinery Corporation or FMC seems to be the first company to utilize this rear gas engine concept. The company was originally working with the military and tracked different military vehicles.

They only moved to make RVs when their military contracts ran out. To keep their workers employed, they turned to build RVs with rear engines. For three years 1973 to 76, they made their version of an RV which was quite popular. It was a smooth, quiet ride and many famous movie and television stars owned one.

What stopped this company from making more than the 1,050 models was the gas embargo and a new military contract to build tanks. There are supposed to be 700 of the FMCs still on the road today.

You can read their story at this link.

The AerBus was supposed to be Rexhall’s rear gas pusher engine model but you may or may not find these on the road anymore. The company was started in the 1980s and was a welcome entrant in the RV industry.

However, throughout its existence, it always had revenue and profit issues that forced it to enter bankruptcy several times. 1992 and 2009 were two occasions.

This financial situation did not affect the quality of the product and Rexhall was a very popular brand. However, it could not sustain any real growth and closed its doors officially in 2016.

Gas rear engines may sound like a good idea on paper but in reality, there was nothing but problems with the design. You should be able to find many of these old models on sale today as they did come with a very nice ride.

One of the problems was the tow rating which was too low for any owners and the power just was not there. It couldn’t beat a diesel engine in that category.

DEF Light On But Tank Is Full International – Freightliner