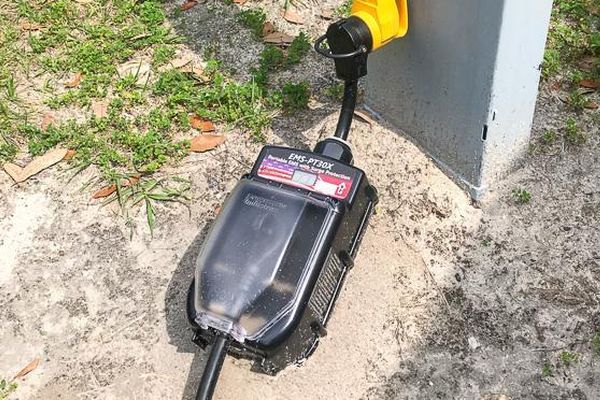 You never know when a surge of electricity will hit your RV. Campgrounds and RV Parks are not known to have the best electrical equipment or supplies thus electrical surges happen. With the right surge protector, you can keep your electrical devices safe.

To learn more about this topic, just continue to read our article. It has the information you want to know about so you can have the best protection against electrical surges when they happen to you.

What is The Difference Between RV Surge Protectors? 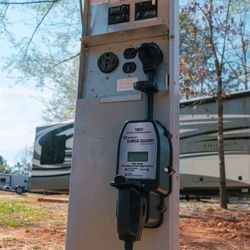 It seems that the SSP and the EMS surge protectors are made by the same company. When it comes to surge protection and indicating whether the pedestal power is wired correctly or not, these models are all the same.

The EMSD goes a step or two further than the SSP. These EMS models stop the bad power from coming to your RV when there is a problem. Also, the EMS models are full service electrical protection devices. They do a lot more than just stop surges from ruining your electrical devices.

While the 30C and 30X can be plugged in anywhere, the 50 series is hardwired into your RV and never moves. The SSP option also is a plug and play design and goes wherever you need it to be.

According to our research, the EMS series is the only surge protector that handles all those duties.

What is The Difference Between An EMS And a Surge Protector?

To understand the difference between these two products, you need to understand and know the purposes behind each device. They both have similar functions but the EMS goes further than a regular surge protector.

To define a surge protector, this is a device that absorbs the abnormal electrical flow that takes place from time to time. It does this to protect the electrical devices connected at the other end of the electrical supply chain.

And if you read the previous section, you will see all that the EMS can do. The regular surge protectors do not have those capabilities. To add to those duties, the EMS will disconnect the RV from the power supply if the electrical flow is outside normal boundaries.

The one drawback to surge protectors is that they are not equipped to handle electrical surges created by the power system you are hooking into. Plus, the surge protector can be damaged by those power surges.

Those power surges are not coming from a lightning strike. If you want full protection, you go with an EMS system. 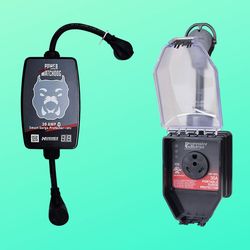 The EMS PT30X is going to be the better product. Both models are made by the same company, Progressive Industries, and they do what they are designed to do. However, the SSP is a simple surge protector and only provides incomplete protection.

The EMS-PT30X does what has already been described above. The SSP does a little bit more than just protect against surges caused by electrical storms. It will shut off power to outlets that have more than one appliance or electrical device plugged into them.

The EMS will manage the electricity so you can have more than one device plugged into the same outlet. You just won’t get an overload. Where the surge protector is better than the EMS system is that it protects your devices from power surges up to and exceeding 10,000 volts.

It seems that the EMS protection stops at 10,000 volts. The EMS has other capabilities and the list is too long to place here. The SSP does plug into an outlet but the EMS is the first line of defense and is wired into your electrical box for all-round protection.

There is little difference between these two devices. The biggest difference is that the EMS-PT30X is an upgrade over the EMS-PT30C. It contains a few more features than the PT30C but in essence, they are the same device.

They both offer a front line defense and protect your whole electrical system before the power surge reaches your electrical devices. Plus, they are both plug and play designed so that operation and application are kept simple.

In addition to that, both devices come with a lifetime warranty and both devices have a 50-amp counterpart. The list of duties is long for both products and you get the above mentioned ones in the PT30X as you do the PT30C.

Also, both products are made in America so you can have confidence that they are built to the right standards and meet all safety regulations. Then, they both have the same 10 error codes with E0 being the normal operating level.

Another difference is that the PT30C is slightly smaller than the PT30X. Not by much but 2 x 1 by 3 inches overall. You will need a bit more room to house the PT30X 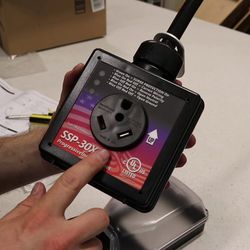 No one is singing the praises of this device, at least in glowing terms that exaggerate its performance. Most reviewers have stated that it works as claimed and that they have had no problems with it.

Out of 5000 reviews, 84% of the users gave it 5 stars, and 12% gave it 4 stars. If someone is lying it is hard to tell as only 4% thought this device was bad. Some of those 4% bad reviews were about the company’s failure to honor its lifetime warranty guarantee.

Then, we saw some very snobbish remarks by owners of the EMS series devices. They trashed the SSP and said the only device you need was another EMS PT30C or X. They felt the SSP was too low-brow for them and for anyone else.

According to the company, the SSP is a surge protector only but it has its limitations. They said to one customer-- “ But the SSP-30xl is a surge protector. It has a surge module in it that will absorb a surge that is over 300 volts. However, since this unit doesn’t have a contactor inside it.

It will not shut down the power. voltages below 300v but above 132 is considered High line voltage and this unit don’t protect from low or high voltage.”

So you may want to think twice about buying this product and moving on up to an EMS model.

Who is best will depend on which product or company you like the best. On one top best list for surge protectors, Surge Guard placed 7 products on that list while Progressive only placed 5.

That just gives you an indication that the two companies are close to the same when producing top-quality products, Except when it comes to construction materials. Surge Guard is said to use heavy-duty casing materials while Progressive only uses cheap plastic materials.

Both companies make products that are fairly easy to use and install and the big difference is in customer service. Surge Guard out duels Progressive in this department.

Progressive beats Surge Guard, when it comes to weather resistance. Their products are better protected than their competitors. Progressive may have beaten Surge Guard to the technological advancement category.

Their EMS devices are supposed to be the only ones that do more than just protect against surges. As to which is better, it is hard to say as so many factors come into play.

The EMS series of protectors certainly is top of the line products and do a great job protecting your electrical devices. But we would not put it past Surge Guard to develop something better soon.

How do I Choose an RV Surge Protector? 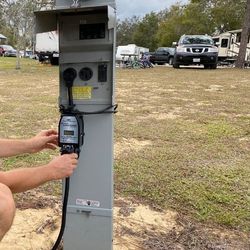 1. Brand name- pick the brand that you know produces top-quality products and stand behind their claims and warranties.

2. Amperage- check the amps your RV is wired for and buy the surge protector that is rated and built for that level.

3. product- not all surge protectors are built the same. Each one will have its own set of features, etc., so you need to look at the label and read about what it does.

4. You want it UL listed- UL stands for Underwriters Laboratories and they test products for safety, etc. If tested and approved, you should see the UL listing on the label

5. Weather resistant- you want one that is protected against the elements. Ones that are, usually have a plastic lid covering the outlet on the surge protector.

6. Display- make sure the device has LED lights and descriptions telling you when something is wrong and when all things are normal

One thing you should note is that surge protectors do not have a long lifespan. They may last 3 to 5 years depending on different factors including but not limited to water damage.

There are enough stores selling these products so you do not have to worry about finding one or getting a replacement. While you may have a built-in surge protector, those devices are limited in their capacity.

It is still advisable to buy another surge protector to make sure you are fully protected from all electrical issues.

Is Surge Protection Worth The Money?

According to the owners who bought the EMS options, yes, this is money well spent. They have had no second thoughts about buying and using the EMS models. In fact, some owners are very emphatic about their endorsement of the EMS systems.

We cannot speak for all products as we have only focused on a couple of brands in this article. However, surge protectors are like any other product you can buy.

There are some good brands making the best product possible and there are those brands that cut corners. The latter do not produce the same high level products as their competitors.

You just have to do some research to see which brand of surge protector is best for your situation. Keep in mind that there are different types of surge protectors and the companies that make those are not making bad products.

They are making different ones and they are as good as other models whose purposes are slightly different. The key is to make sure you get the surge protector that does those duties you want to be done.

Some people are quite happy with the SSP model and get great protection from it. Others prefer more sophisticated options and like their results. The key is to make sure you get the right one for your camping situation.

It seems to go without saying it too much that RVers need to have a surge protector in their electrical defense arsenal. You cannot rely on campgrounds and RV parks to have the best wiring in the world.

Getting that extra protection is only using some common sense. Which device you buy for that protection is up to you but so far the EMS series seems to be one of the best options out there.

However, their competitors are making good products as well. The price may be the final determiner in this decision.