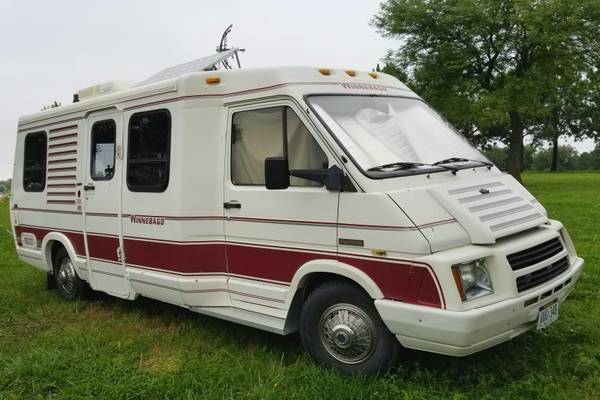 The concept of less is more is very popular. But Winnebago beat everyone to the punch when the American fuel crisis influenced them to go small. The result was a unique RV that had a decent engine but not a lot of living space.

The small size was great for maneuvering but that was about it. Inside the engine compartment, these little RVs had an overhead camshaft 4 cylinder normally-aspirated 2068cc (57 hp) diesel engine through a four-speed transaxle. Later models had an engine upgrade.

To learn more about this short-lived smaller RV, just continue to read our article. it has the information you need to know about if you are considering purchasing one for you or a loved one. take a few minutes and get up to speed on this unique RV. 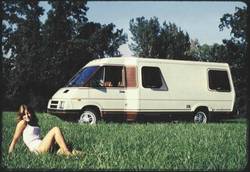 The advertising concept for this RV was quite original. Winnebago said you can buy the Itasca as a second car and get another home for free. The company also said this RV was a lake home, a vacation home, and a home away from home.

Or it could be a portable party room or a guest bedroom. How you used it was up to you. But no matter how you did, it was that second home you always wanted. Inside was a shower, sleeping facilities for 4, a 20,000 BTU forced air furnace as well as closet space.

Its purpose was to appeal to those people who liked the idea of owning and using an RV but did not want to spend a lot of money on the larger models. This design was seen in a few iterations that included the Lesharo, Itasca Phasar, Centuri, Utility Van, and eventually the Rialta between the years 1995 and 2003.

If you do your proper maintenance, the Renault engine used in this vehicle lasted a long time and was very dependable, However, if you didn’t one of the main common problems you would possibly encounter would be a blown head gasket.

Then if you wanted to do your own work on the engine, you had plenty of room on one side while next to no room on the other. That made it a bit difficult to maneuver tools and your body. But that is minor when you realize the weakest link lies in an important part.

The auto transmission with final drive was that weak link and it seemed to have failed quite often. Then you would have some issues with the water pump, hoses as well as other small parts that are common no matter which vehicle you drive.

These issues are more of a nuisance but since the motor was from a European company, the parts to replace them were quite expensive. It would take someone with knowledge of the Renault engine to replace the bad parts as well. 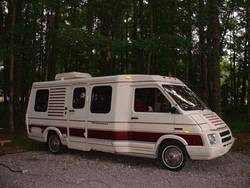 For the most part, owners did like the size and model they bought. The major drawback that they all had in common was that the engine was very expensive to repair. Plus, parts these days for those old engines are scarce.

Other than that, most of the owners were quite pleases with their vehicle and are amazed that they can get one very cheap these days. They liked how the RV got great gas mileage with some reporting up to 22 mpg and no one said anything lower than 18.

Another owner said as long as you keep them well maintained, the RV is easy to drive and as reported earlier, very economical. Then another owner said it is perfect for 2 people especially the sleeping quarters.

However, adding two more people made sleeping a bit tight and uncomfortable. probably the biggest criticism was aimed at the motor. The owners felt Winnebago could have done better than a small Renault engine.

But that company was selected because the oil crisis had just ended and RV makers were skittish about low fuel economy.

In the beginning, the LeSharo was powered by the overhead camshaft 4 cylinder normally-aspirated 2068cc Renault engine. It did seem to have overheating problems as it may have been too small. Also, the top hp was only registering 57 in total.

Then in 1984, Winnebago upgraded its engine to a 2068cc Turbo Diesel with Intercooler, bringing up the power up to 75hp but still using the same 4-speed transmission that was on the 82 and 83 models.

But problems did persist and the company again redid the engine boosting it to a 2165 CC with fuel injection and a new computer-controlled 3-speed transaxle. The total weight was just under 6000 pounds and measured only 20 feet in length.

Inside was a unique bathroom design that had you pulling a section of the floor out and then sliding the bathroom into place. A pull-down sink and shower were included in the bathroom.

There was a furnace in almost all the vehicles but many of those models did not come with air conditioning. 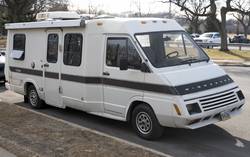 The dimensions work out to be a little larger than a traditional van. The exterior width is 7’ 4” with an overall exterior length of 20 feet 10 inches. The wheelbase stood at 145 inches and it could carry 30 pounds of liquid propane.

Inside, you had roughly 6 feet of headroom at the maximum level. The standard level for headroom was 5 feet 8 inches tall. the exterior height measured in at 8 feet 3 inches. then the holding tank could only hold about 13 gallons with a 5-gallon aux. tank.

The freshwater tank was a little bigger and it held 22 gallons. Inside the living area were 2 lounges, with armrests, stainless steel sink, ceiling vents, dome lights, carpeting, a convertible dinette that moved down into a small bed when needed.

There was also a 2 cubic foot fridge, a 20,000 BTU heater, a 2 burner stainless steel hot plate, and a 6-gallon water heater. Air conditioning was considered optional for this RV.

Due to the small 4-cylinder engine, the top speed on this RV was not that impressive. The best speed we found for one of the models was 80 mph. That may be going downhill with a strong wind at your back.

But the slower speed only helped the fuel mileage. it has been said that this model could get between 18 and 22 mpg. Which is very good for an RV even the smaller Class Bs.

Some models were only built to go as fast as 63 mph which is not very fast when you think about it. Part of the problem was that the diesel could not handle long slow inclines very well. Flat roads were a breeze and you could go a lot faster until you came to a nice hill that was not so steep.

The power was just not there in those smaller 4 cylinder engines at that time. Much has changed over the intervening 40 years or so. The weight of the RV plays a large role in slowing the vehicle down. 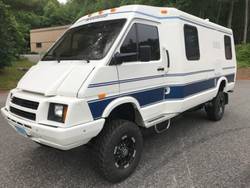 There are two popular conversion routes to take if you want to get rid of that Renault motor. The first is to replace it with a Chrysler engine and the second is to use a Buick motor. But that may be the way to go instead of just paying $600 for a replacement Renault motor that may or may not be guaranteed to work for long.

In either the Chrysler or the Buick motors case, you would need to remove the Chrysler’s platform car’s front end and stick it under the LeSharo. For the Buick, it would require the same type of work for the FWD.

While these are two very good motors, the cost of the conversion can be quite expensive. In one estimate we saw, there would be over 100 hours of labor involved. Part of that labor would be manufacturing custom axle shafts.

In total, you are looking at about $5000 to get the job done right. It may have been possible to use the AMC i4 2.5 motor as the Jeep Cherokee used that size of engine at that time.

The biggest hassle when making a conversion is making sure all the key parts are compatible and will fit together without much hassle or adaptation.

The fastest and probably the easiest way to find one of these RVs for sale is to look through your computer search engine results. We found several websites that deal in cars and RVs that had at least one for sale at the time of this writing.

The prices will range and we saw one site that listed them between $2400 and $8000 approx. There may be some FSBO opportunities as well as some car dealers only take a commission while the owner sells their vehicle.

The next place to try would be your local classified ads or Craigslist. You never know when one will come up for sale and keeping your eyes open and scouring the different classified sections, you should be able to find a good one near you.

Or you can try a car finder website that searches the nation for you. These websites help bring you the best deal possible. Of course, you will need to look at the condition of the RV and the motor before making a final purchase decision.

Since many of these vehicles were shipped to European markets, you may have better luck finding one for sale in one of the many European countries. 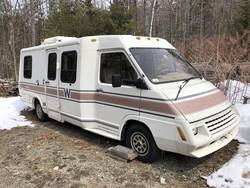 The value is what you will make of it. Obviously, the owner of the RV will place a higher value on his vehicle than you will. That is until you use it and find out you like it. Then you may value it a little more highly.

The value depends on several factors and you can check the Blue Book for RVs to get an idea of what those estimators think they are worth. They are fairly accurate but often way under what an actual owner may think his RV is worth.

You have to consider the shape, and size of the motor, the condition of the RV as well as how much maintenance has been done on the vehicle. Then don’t forget to consider the year as the older models are not going to be sold for more than $2000 if the owner is honest.

It will be the more recent models that will command the higher price. Yet, those models can vary in price as 1989s are going for $3500, $2400, $7000, and even more. In other words, even the same year models will have a wide range of prices to consider.

You can always take some value off if the RV does not have an air conditioner or other amenities you think are vital. The value of one of these RVs is in your hands.

owning and operating a smaller RV is not a bad idea. The key is going to be the size of the engine. If it is not strong enough, then your vacation time may be overshadowed by its poor performance.

However, the fuel economy may make it better as you will have more money for you and your spouse. You will have to consider all angles to determine if it is worth it or not for you to own one of these unique RVs.