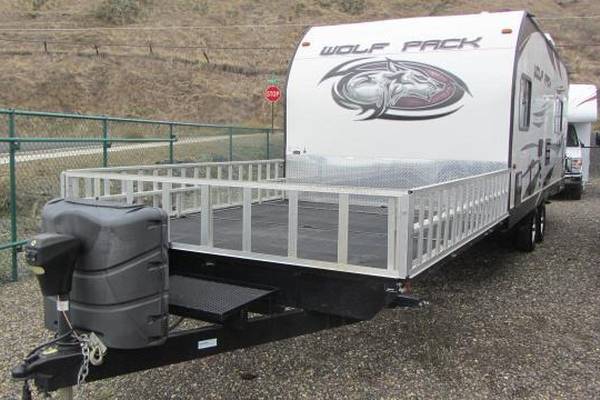 Bringing the toys... One group of RVers think they need lots of toys along with them when they go on holiday. For them, different RV makers have built toy haulers. Some even go to the length of putting the toy deck in the front with the tongue. It may be easier to load and in a more convenient location.

There are different manufacturers who make a few of these models. Jayco makes one in a pop-up format, Crossroads makes a few, KZ Frontier, Rockwood, and Jumping Jack just to name a few There should be more brands out there doing this.

To learn more about this topic, just continue to read our article. It explores the issue so you can get on the right track to finding a model that fits your lifestyle and toys. Take a few minutes to see if these options are for you. 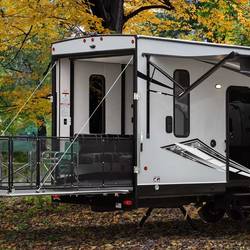 As you know, a toy hauler is an RV or trailer that has a built-in garage. You can use that space to haul ATMs, motorcycles, bikes, and canoes and even use it as storage. But all toy haulers are not the same.

There are different kinds and you have to be careful not to confuse them and buy the wrong model. The open deck model is a typical toy hauler with a built-in garage and a ramp that acts as a door.

Also, that ramp has a third function. It can be raised a little way and act as a nice deck or patio similar to the one built on many traditional homes. This is not something on the front of your toy hauler.

It is in the rear like regular toy haulers and after you get your toys out, you can use it to relax after a hard day of fun. The front deck toy hauler is a trailer that has the deck on the front.

The difference is that it is not enclosed and does not take up any of your living space. It is convenient because you can park your dirty ATM, etc., and not get any dirt in your living area. Access is always from the outside.

The front deck will come with fences and a gate, but it usually does not have a roof on it and those fences are not that large. 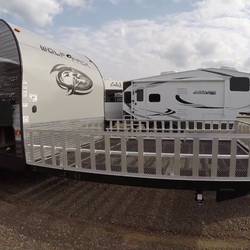 These are handy to have if you want more living space and do not want to get any dirt tracked all over your living area. As we said they are an all-outside access design that allows you to get rid of the dirt and grime before you enter the trailer.

There are some drawbacks to buying one of these trailers. One is their length. The front deck can make the trailer a bit longer than normal trailers. That will make it hard for maneuvering and find the perfect camping spot.

A second drawback will be the tongue weight. This is probably the reason why these front deck toy haulers are not in large demand. The toys and the deck put a lot of extra weight on the tongue filling up that weight capacity quickly.

You will need a very powerful and strong truck to compensate for that issue. Finally, toy haulers with front decks can be a bit more expensive than regular toy haulers.

Some 10-year-old used trailers are still commanding a $20,000 price tag unless it is a pop-up. A 10-year-old Jayco pop-up is costing just under $13,000. They are not going to be cheap and you will be inheriting other people’s problems.

There are different mainstream RV brands that make a few front deck toy haulers. Most of the options we have seen are designed as pop-up trailers. Not every pop-up toy hauler comes with a front deck.

There are other designs that come with the lists of best front deck pop-up toy haulers. You have to be careful when reading their descriptions. Here are some of the manufacturers that make different versions of this trailer:

4. Jayco Baja- This is an A-frame design and its front deck only holds 1500 pounds. Plus it gets to 20 feet in length. Watch the hitch weight though.

6. Jumping Jack Mid 6×12- we included this model even though you can take the tent off and turn this trailer into a utility trailer. It is not a true toy hauler but it can be used in that fashion.

Forest River seems to make an 8 by 10 front deck toy hauler. That is the size of the deck only ad there is a small trailer placed behind it. It was in the Cherokee series but if they still make this model or not is not known.

One owner looked it up and did not find it listed. The reason you do not see more travel trailers with front decks is the tongue weight issue. There are models out there but they are going to be few and far in between 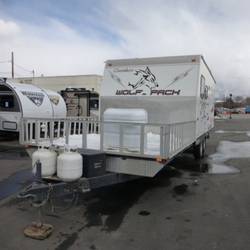 We were kind of afraid this would happen. We got wind of it as we were writing this article. To double-check, we went to their website to see if they still made front deck toy haulers. They don’t.

WolfPack is a sub-division of Forest River and that alignment may be the reason this company is not making those front deck toy haulers anymore. But it may also be due to the issues with the tongue weight.

Check out your local used RV dealers to see if they have any on sale. The internet lists them from all across the country so there may be one near you. 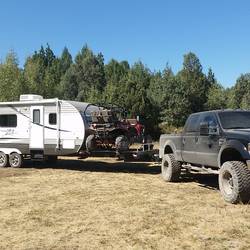 The story seems to be the same for this RV brand. This company is now owned by Thor and while it is said that Crossroads has a couple of toy hauler models, their website does not indicate that claim.

Your cost will depend on the seller and how motivated they are. The models made by Crossroads are standard front decks with small fences making sure your toys do not go anywhere.

Also, the length varies from roughly 20 feet to 34 feet in length. If you can get a used one in good shape you are ahead of the game and can save some money. 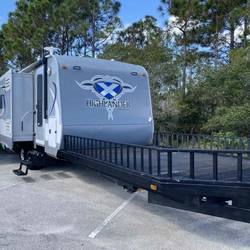 This RV brand is the same as the previous two. We checked their website and they have no front deck toy haulers in their line-up. It seems that everyone is going to the rear toy hauler design as it is more practical and safer.

The most recent model is a 2018 and it is 34 feet long approx. The trailer sells for almost $40,000 but it has lots of great features added to it. This toy hauler model was made by Highlander Ridge who named this model series after itself.

As of about 2019, you won’t see any Highlander model series in a front deck toy hauler design. This seems to be the trend as RV makers shy away from potential issues that can affect their bottom line.

It is doubtful that you will find many travel trailers made in this design anymore. The convenience of the design is over-ruled by the problems that come with having the toy hauler deck upfront.

You will find that this trailer option is a dying breed. While it is a convenient design, more people prefer the rear toy hauler system because they have better options and their toys are not exposed to theft or damage.

That may be a third reason why RV makers do not make these trailers anymore. Not enough people want them to justify the costs of building. If you really want one, used is going to be the best route for you to take. There are still some in great shape.