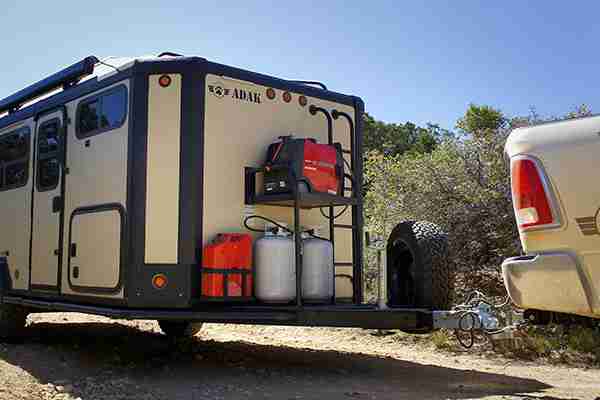 Can You Use a Generator While Driving an RV? Legal or Safe

Whether you’re a family of weekend campers or a retired couple looking to travel full-time, every RV beginner has a bunch of questions bothering them before making the maiden voyage. Today, we’re going to tackle one of the most common questions we come across: “Can I have a running generator in RV while driving?”

The answer is yes. Yes, you can have your generator while driving your motorhome. However, the thing is, you can’t just read the straightforward answer without getting into details. In order to really know what’s the deal with generators in RVs, keep on reading!

Can I Run My Generator While Driving My RV?

Assuming you just bought your new motorhome and you can’t wait to hit the road, this is going to be one of your questions. We’ve given you the answer — Yes, you can run your generator while driving the RV.

You might think to yourself now “Well, my buddy Brian runs his external generator while driving, and it seems to be working just fine”. Okay, that’s true, even those who have external generators are able to run it during their trip. However, both them and your buddy Brian should take some things into consideration before flipping the generator switch. We’ll go through the topic of safety later on, but let’s just say that those who want to use the generator should be mindful about doing so within limits and taking proper care of it.

Is it legal to Run a Generator While Driving?

There’s been a certain amount of confusion about whether it’s legal or not to run a generator while driving. However, after doing thorough research on this question, we must say that we aren’t aware of any laws against it.

Is it Safe to Run an RV Generator While Driving? 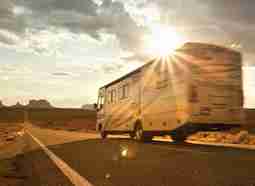 As we’ve mentioned earlier, not every RV comes with a built-in generator. That’s why you can think about using a portable, external unit. But there are potential risks you should be aware of. The thing about the built-in unit is that they are fastened really tightly. Hence, there would be no option for moving or rolling down. Well, when it comes to portable generators, that’s not the case. Even when you think you have it fastened, they aren’t as fastened as a built-in one would be.

In addition to that, external generators might not be covered properly. That’s another risk of hazards. Also, a generator that is placed in the backside should be connected through the underway, but may prove to pose another issue because the wiring might be exposed. When you have a built-in generator, you needn't worry about the wiring and the other cords. Instead, they will be covered and insulated properly. Finally, with the portable generators, there’s a possibility of fumes, which is not that big of a problem. Still, you can never be too safe.

So if you really want to use an external generator while driving the RV, you need to make sure that you’ve covered all the points we’ve listed. 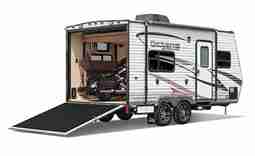 A Toy Hauler is a Trailer RV that has a large opening with a ramp door in the rear. We can easily describe it as something in-between a travel trailer and an open-box or cargo trailer.

The majority of toy hauler units are self-contained, which means that the trailer will be able to run completely on its own, without the need for RV hookups. Essentially, there’s a big chance that your toy hauler will function perfectly without the generator. However, if you want to have the AC running, a microwave or basically anything that needs to be plugged in somewhere, you’re going to need a generator. With some appliances that are considered as small appliances, such as a TV, you can even run the inverter. That means that your appliances would be powered by the propane alone or the 12v battery.

But this battery won’t last long. Typically, it can last one day only. Two days is the absolute maximum. That’s why we recommend tuning a generator while driving a toy hauler at least for one part of the day. That way, you will make sure that the battery is kept well-charged up.

What About an RV Wind Generator While Driving? 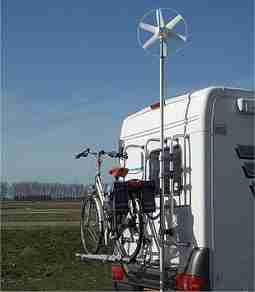 The world has gone crazy about going green and so have the RV lovers! Many of them have solar panels on their motorhomes, and that’s not all! There’s another way to help the earth and, at the same time, cut your utility expenses. We’re talking about mounting a turbine, or windmill, on top of your RV. That way, you’ll be able to use the wind to your advantage. Think about it, the wind is usually pretty annoying, and this is a great way to turn things around.

The wind turbine is like a miniature version of the windmills you might have seen across the country and on wind farms.

These wind generators are 45 to 80-feet tall and are suitable for home and farm use. However, they are becoming more and more popular among RV drivers too! What makes them so interesting to the drivers are the versions they can mount on their RV and use the wind to power their appliances properly.

Should You Start an RV Generator While Driving?

This is a question that almost no one expects because the common question that most people have is “Can you run a motorhome generator while driving?”. But if you go a bit deeper into the fact that you can, and you should run it, you’ll realize how beneficial it can be! We aren’t talking about running your kitchen appliances and AC right now. It’s pretty obvious that letting the generator run while you drive would grant you a quick sandwich and a cool breeze. However, we want to cover another thing.

The purpose of a generator in your RV, regardless of whether it’s built-in or external, is to run it as often as possible. In fact, an under-used generator can be an additional hazard on the road. You should run the generator in your motorhome for as many hours as you can. That way, you’ll be making sure it remains in good working conditions. If you don’t use it properly and you don’t use it often, the generator will soon need a repair. What’s more, we definitely recommend using it while boondocking. And if you don’t want to use it while boondocking or dry camping, then what’s the point of having it in the first place?

Generator Shuts Off While Driving the RV

One more perk about having a built-in generator is that it shuts off automatically when your gas tank starts running low. Typically, what’s considered as “low” level when it comes to gas is a tank that’s only 1/4th full. If you give it some thought, this is a pretty good feature to have! That way, you won’t have a need to constantly keep an eye on the gas tank level. In addition to that, you won’t ever be in a position where your tank suddenly becomes empty and you can’t move your RV anywhere.

How You Can Go Without a Generator

Basically, the main reason for you to run your generator while driving is if you want to run the refrigerator or the AC. So it’s pretty obvious that if you don’t need to run the AC or other small appliances, you can go without a generator.

Essentially, during the non-summer season, you won’t be needing an AC, right? So for the most part of the year, you can go without one. And when it comes to the refrigerator, as there’s a high probability you’ll need food on a trip, here are some tips we have for you:

If you’re planning to travel during summertime but still want to avoid the AC, here’s what you should do:

There you have it, guys! We’ve not only given you the answer to the question of whether having a running generator in an RV while driving is acceptable or not, but we’ve also gone in detail about the topic. To sum up:

All in all, you should understand that having a generator in your RV is not a must. However, it is pretty convenient. And now you’re all set! The next time someone approaches you asking “Can you run a motorhome generator while driving?”, you can share everything you’ve learned today!

What Is the ACTIVE Network Credit Card Charge? (Refund)