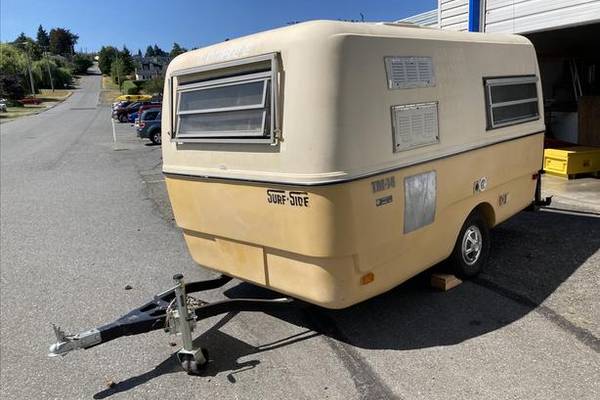 Not every RV is made in America. Canada is making the Triple E Surfside and they are meeting the strict Canadian Standards association specs. They should have the seal of approval on every Surfside trailer’s exterior. North American made is as good as American made.

The tag states that the GVW weight of the Surfside trailer is 1600 pounds. There may be conflicting testimony on that number as some people have weighed their trailer and it came out to almost 1900 pounds. Some say it is as low as 1300 so double check your tags to make sure.

To learn more about the Surfside trailer just continue to read our article. It has the information you want to know about. This looks to be a very well-made trailer that has to meet some very high standards. 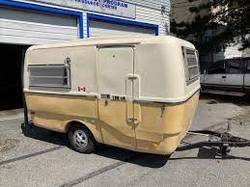 These are very tiny trailers that can be pulled by just about any vehicle on the road today. They were about 14 feet long and no more than 6 to 7 feet wide. Those dimensions are not giving the owners much room but they were perfect for couples.

The treated steel undercarriage and frame did resist rust. Then the fiberglass skin helped keep the weight off without losing any security or protection from the elements.

Inside you have 5400 BTU burners and a 2.2 cubic foot fridge. The fridge was a 3-way model and did its job well. The rest of the interior was made up of a bed n the back, some cupboard space, and a kitchenette.

The weight has been reported as reaching only 1600 pounds and some people feared it would be very easy to overload this trailer with lots of equipment and supplies. Some people dispute that weight but have failed to provide any credible evidence to support their claims.

The trailer was made from fiberglass and there are very few components inside to add too much weight to the trailer. There were only the basic amenities built-in and that helped keep the weight down.

There also doesn't seem to be any changes to the length. The style of this trailer seems to have been the style of all the models.

There seems to be some difficulty in getting an accurate history of this trailer. When the original owners started the company, the trailers they made in the 60s were like any standard trailer made. The looks were the same as every other trailer at that time.

When Jim Pattison bought the company in 1969, that may have been the time the Surfside trailer was taking shape. There seems to be some talk of the Surfside being made by another Jim Pattison company called the Armor Coach Industries.

For some reason, Mr. Pattison was losing money so he sold the company back to the original owners. In 1976, which was the year the company started producing Surfside trailers. This production lasted into the 80s.

You can double-check the history but there is not even a picture of the triple E Surfside trailer among its pages. There is not a lot of information on the internet about this trailer.

There are such trailers as mentioned in the subheading. However, those trailers are not made by the Canadian Triple E company. They are made by Pacific Coach Works who call a line of their trailers Surf Side.

Triple E doesn't make the Surfside trailer anymore. their line of classy trailers is called the Topaz and they are a far cry from those mini trailers they produced over 40 years ago.

Pacific Coach 14 RBS and the 16BB are very compact trailers with standard floor plans. The bathroom is located in the rear of the trailer for both models and the main bed is located at the front.

The 16BB has a set of bunk beds next to the toilet in the rear while the 14RBS has a larger bathroom area instead. The entry for the 14 RBS is at the rear of the coach while the 16BB has the entry at the front next to the main bed.

The dimensions of these trailers are 19 1/ feet long for the RBS and almost 21 feet for the BB model. The widths and heights of both are the same at 84 inches and 78 inches respectively. Their overall weight is 4000 pounds for the 14RBS and 3650 for the 16BB. 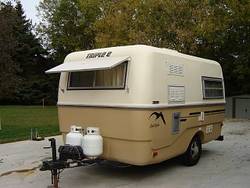 We have not seen anyone saying stay away from these trailers. Nor have there been any reviews that claim there are a lot of leaks taking place. That may be because these trailers were made to meet high and very strict Canadian standards.

Most people have compared it to the Boler brand or the Scamp brand of trailers that were similar in design. One comment was that this trailer was designed by the man who designed the beachcomber trailer for another company.

One owner stated that he bought his Surfside because its bed was wider than the Boler’s bed. That can make a difference when you are trying to sleep. A lot of the comments come in the ‘love it’ or ‘awesome’ adjective category.

Again, there are not many comments about how bad this trailer is. One person didn’t like the fact that the trailer brakes were not hooked up but that was an owner issue, not a manufacturing one.

Another person said that the molds for the Trillium trailer were used for the construction of the Surfside and when parked side by side, there was no difference between the two trailers. 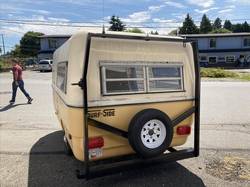 We have one link to get you started on this quest so far. The manual can be viewed at this link and it is only 13 pages long. Unfortunately, it doesn't list any specs for the trailer.

The website at this link is asking for old manuals so they can create a library of them. They may have some old Surfside booklets but you may have to contact them to find out. if they don’t they may know where you can look to find one.

Since the company is still in business, you can try contacting them to see if they have some old ones digitalized or lying around somewhere in storage. Their contact info is at this link.

The old manuals may be found through that specific type of search engine. Most places giving tips on how to find old RV manuals focus only on American companies. 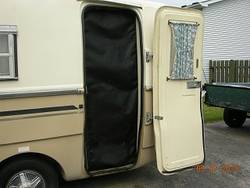 This you may have to contact the company for leads. They do have an American office so they may be able to help you track down where you can find parts if they do not make them or store them anymore.

Also, since this trailer was mainly sold in Canada, you may have to search Canadian classified ads or the Canadian section of Craigslist.

Junkyards may be another place and you may be able to find one cheap enough to buy as a parts trailer. many owners have kept their trailers in good shape so the parts will be viable to replace broken parts on your trailer.

Finding an old triple E surfside trailer may not be that easy to do. but when you do, you can find them for under $8,000. One owner was selling theirs for $3,000 approx. There is no telling how many were made during their approx. 10 to 15-year production run but there are still coming up for sale all the time.

They are great for remodeling projects when you like to create your own floor plan.