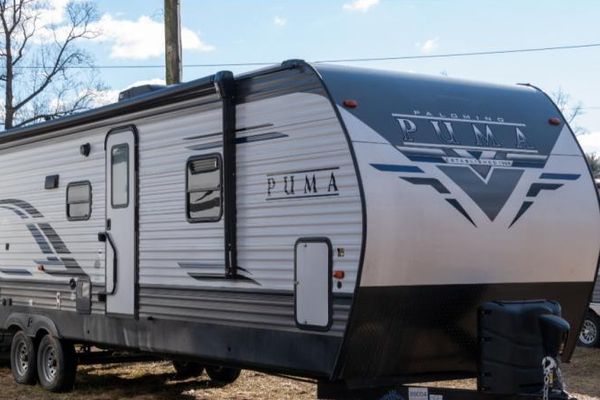 Puma vs Keystone Reviews: Are Puma RVs Any Good? (Quality)

When you want a great deal and save money, comparison shopping is what you have to do. You need to shop around and make comparisons. Not only will you find an RV that fits your needs but you could save a lot of money by finding a better price.

So far the Puma trailers have been receiving some great reviews. People have been happy with their purchase as well as with the money they save over buying a mainstream RV brand. There have been no harsh complaints yet.

To learn more about this topic and how good the Puma RV is, just continue to read our article. It has the information you want to know about so you can find an economical RV at a price you can afford. It is worth looking into.

Who is Puma Travel Trailers Made By? 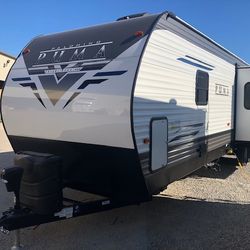 The initial name you will see is Palomino. That is a company that was started by Vern Landey in Minnesota. As the company grew, he moved his facilities to Michigan in 1972.

This move seemed beneficial to the company as orders kept pouring in for his trailers and campers. Originally, the parent company of Palomino RVs was Vanguard Industries. This company kept expanding developing new lines of businesses along with keeping the Palomino brand growing.

However, these success stories have a way of attracting the attention of larger companies. In 2002 Forest River bought Vanguard Industries including Palomino and started to make the same trailers under the Palomino brand.

This purchase brought about the Puma model series. Then in 2005 Berkshire Hathaway bought Forest River and made Palomino a separate division of Forest River.

Palomino is supposed to be one of the 5 best RV brands in the nation and they have over 300 dealers representing their products. The change in ownership should not have made an impact on the quality of their RVs or trailers.

Where Are Puma RVs Made?

There seem to be 3 factories producing the Puma model series and Palomino brands. One is located in Colon, Michigan, and the other two are located in Goshen & Middlebury, Indiana.

The company did experience a tragedy as the Colon, Michigan factory has been in operation since 1972 and was destroyed by a fire 20 years later. That set back production for a little bit but not long enough to delay the release of the 1993 models in august of 1992.

Once rebuilt, the factory location has remained the same and produces many Puma series campers, etc. It is said that the company will take trade-ins if you are interested in upgrading your current trailer or camper.

Puma may be more economical than other Forest River brands and models and the Wolf Pack which is said to be of the same class is $6000 more. But you would have to do your own comparison shopping to see if that figure is accurate or not.

With this brand, you can get a 5th wheel option, a toy hauler, or a regular travel trailer. They do not seem to make self-drive RVs The Puma Ultra-lite is the smallest model they offer 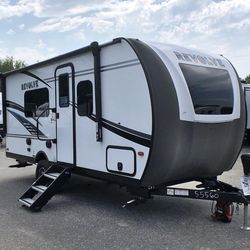 This is the standard American success story. The founder of puma or Palomino was Vern Landrey and his occupation was a tent-trailer distributor. This gave him the experience he needed to start his own tent-trailer manufacturing business.

As he saw the lower-quality tent-trailers coming through his dealership, the usual thought that goes through many founders’ minds is that he could do better.

It seems that he did as his Palomino trailers were a success. From humble beginnings in Savage, Minn., making simple pop-up trailers, his business grew. It grew so much that he had to move to better facilities in Michigan.

The factory there was destroyed by fire but the new facilities remain on the same site and are producing some top travel trailers. The expansion of the business was inevitable and soon factories were located in Goshen and Middlebury.

Puma and Sabre were the new model lines that came out when Forest River bought the company in 2002. They were and are built in the 2 Indiana locations.

The company is seeing excellent sales now that Berkshire has taken over the ownership of this brand.

Is Puma a Good RV Brand?

From our research, it seems that very few people have anything negative to say about this brand and model series. Some owners have said that they have not experienced any major problems with their Puma trailers.

One owner went on to say that he has owned 3 of these models and has been satisfied with them all. They were not perfect according to him but they were perfect for their camping needs

He also said that his trailers were better built than some of the competition’s trailers in the same class. Other reviewers liked all the features built into these models, including the USB ports.

The 80-inch inside height really impressed one reviewer. These trailers are built with some very nice features that make living in them quite comfortable. Of the 8 floor plans for the Destination, you can get 2 with 4 slide-outs.

So far, we have not come across any series of reviews that point out any major flaws. This has been echoed by other RV owners. Most people are impressed by the quality of the build and how well everything works inside their trailers. 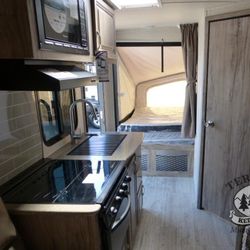 If the reviews indicate anything, it is that Palomino is taking their products very seriously. They are building some of the finest travel trailers, etc., that money can buy. They don’t get to be in the top 5 by building sloppy trailers or campers.

So far, we have not seen any complaints about the quality of their trailers. In some of the top best lists that pop up in any search, Palomino is lumped in with all Forest River brands and still, they get good reviews.

One major point that was made in one review was that these trailers are top-quality and affordable. The last point was the major one as the bottom line is what gets most people to buy.

In comparison shopping, it is possible to get a good trade-in value as well as a lower price compared to the competition in the same class. One owner found a $6000 savings and was also given a $7000 trade-in value for his current trailer.

Of course, condition plays a large role in that trade-in offer. It is worth checking out as the word on the street is that Palomino Pumas as well built and worth the money they cost to own.

In looking at the Ultra-lites as a starting point, this trailer comes with some top construction features. Diamond plate is on the front radius, the powdered coating is on the steel frame, super lube axles and Darco underbelly cover are just the beginning components.

Then there is the AlphaPly roofing membrane that comes with a limited lifetime warranty, along with tinted safety windows. Palomino does go the extra mile with its products including the lower end of the scale.

This attention to detail and quality makes it worth buying a Palomino Puma trailer. The company does all of this as well as keeping the weight down to more manageable sizes. Their lightweight but strong construction techniques make them easy to pull or put in your truck’s bed.

On one best of the bunch list, Palomino is listed at #20 in the 5th wheel category. That is 8 points lower than the Forest River brand. In the travel trailer category, they did not make the list.

But then the reviewer only listed 13 instead of the 27 he listed for 5th wheel trailers. Forest River did not make that second list either. While the Palomino Pumas are not perfect, they are still well-built and should serve you for a long time. 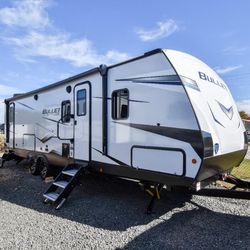 In the same two lists we just mentioned, Keystone was rated at #3 in both of them. That reviewer thinks that the Puma is not as good as the Keystone models. But another reviewer with his best list does not list Keystone at all while putting Forest River brands collectively at #3.

In a comparison of destination trailers, it seems that the reviewer also favored Keystone models over the Puma model. The latter comes with 7 floor plans as well as the construction materials we already mentioned above.

The Keystone brand makes two models, the Residence & the Retreat. Both are solidly made and use powder coating over the steam frames. The Residence comes with 14 floor plans and the Retreat only has 7.

Both of these models seem to be well built and contain many features that make them feel at home. The big bonus in buying the Retreat is that it comes with a central vacuum system making cleaning up a little easier.

Overall, it will be up to your preferences and what features you want to be included. Both are well-built trailer models and you could do a lot worse. Keystone may have the edge at this time but it may not be as affordable as Puma.

As we have said, there are not that many negative reviews that claim this model of the trailer is junk, badly constructed, or a waste of money. Most of the negative reviews focus on minor issues that are easily fixed.

Almost all reviewers love that overall 80-inch interior height that is found in most of their models. The company makes the exterior height to 11 feet 1-inch which gives you lots of clearance as you travel.

Another feature they liked was the fact that Puma trailers, for the most part, were 1/2 ton towable. You did not have to upgrade your pick-up truck to own and tow one of these trailers.

That is a bonus for those who like their smaller pick-up trucks and use them as a daily driver as well. What is nice also, are the many different types of slide-outs you can get on the bigger trailer models.

On those bigger models, you can get between 2 and 4 slide-outs. Plus, some of the models come with a 2 bedroom design. Privacy is nice and Puma provides it. Most options only come with 1 bedroom with an 80 by 60-inch Queen size bed.

These are well-built trailers that the majority of reviewers we read liked and felt were a good camping option. 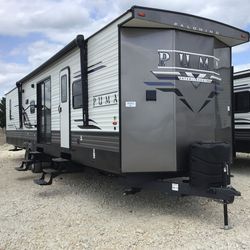 No one we have seen so far has put this brand on a 5-star rating system. We did check RV insider and their web page does do a 5-start rating system but no one has used that website to rate their models.

If we were to judge by the number of positive reviews we saw, we would hazard a guess that this brand rates between 4 and 5 stars easily. Probably a 4.5-star rating would be the most accurate as these trailers are not perfect.

It is hard to say as ratings are subjective and that was proven when the Palomino was given 3rd place on one list and 20th on another. Your rating will be all that matters since you will be the one living and using their trailers.

If you are happy with I, and most owners are, then that means it should get a very high rating. It doesn’t matter what other people think as it is yours and it serves your needs well.

You certainly can do a lot worse than a Palomino Puma as your trailer of choice. It is hard to do better. This is a well-built travel trailer, etc., that comes from a company that likes quality over anything else.

It does come with its share of flaws but so far, those flaws are all minor. At least according to the people who own them. Try one out to see for yourself.