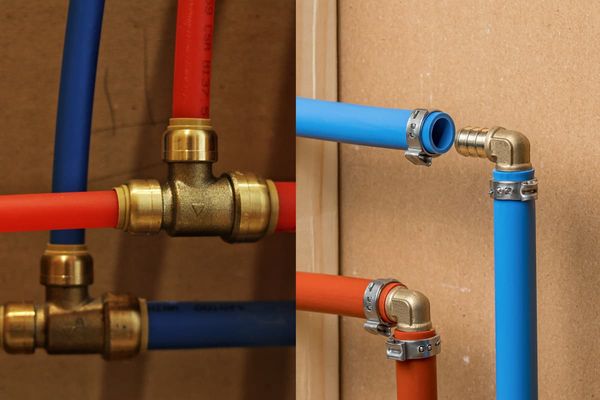 PEX Crimp vs SharkBite: Is PEX Crimping Better Than SharkBite?

Today’s plumbing industry has become something your grandfather would not recognize. Gone are the days of blow torches, pipe wrenches, and other tools. In comes a simple crimping method that uses plastic and possibly a hacksaw. It is easier to plumb water lines today than it ever has been.

When it comes time to choose, two major factors will be involved, the longevity of each option and the price tag. PEX seems to last longer because it uses metal parts. Sharkbite tends to be more expensive though and that may influence many decisions on which one to use.

Is PEX Crimping Better Than SharkBite? 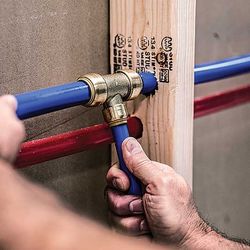 Price-wise, PEX may have the edge as it has been said it is the least expensive of the two. If you want to save a few bucks then PEX is the option for you and will be best for your plumbing project.

For the short-term Shark Bite seems to have the edge. Its O-rings do last between 8 and 10 years which makes it an ideal solution when you are going to change your plumbing in a decade or so.

However, PEX crimping is said to last longer than the shark Bite O-rings making it the best option for long-term projects that won’t be touched in more than a decade or two.

What may undermine PEX’s claim of being better than Shark Bite is the fact that the crimping technique takes some time to get used to and do properly. If the crimping is not done in the right manner, then leaking can occur.

But leaking can occur in the Shark Bite’s O-rings which still keeps the comparison close in this category. What might be the factor that tips the tide n PEX’s favor is its flexibility. It removes the need for multiple connections because it can be maneuvered into many different positions.

Finally, the design of both fittings is what will make the difference. The PEX component is a metal ring that takes a simple crimping tool to make any connections you want.

The Shark Bite component, is a flat piece of metal that has teeth on both sides, hence the name. It is a quick way to make plumbing connections but it may take longer to get into position than the PEX option.

Instead of writing another long section on the differences between the two products, here is an easy to read table that highlights the key points and shows how different the two products are. There is no order to the list:

Another difference between these two products is that it is said that the Shark Bite option is stronger than the PEX solution. Both products are said to be excellent when it comes to quality.

One drawback to the Shark Bite option is that it is limited to RV and household use only. The PEX can work with radiant heat as well as ice rink plumbing needs.

PEX Push To Connect vs Crimp 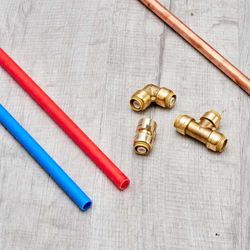 This could be a matter of opinion and preference as both systems have their good and bad points. But if you look at the leaking factor, then the crimp option is superior to the push option.

What makes the push to connect system better, is that they are easier to work with and do not require special tools to work with them. This option also works with PEX and copper pipes and is good for any transition plumbing that needs to be done.

This is not talking about the PEX expansion system. That is another comparison that can be done later on and down the road.

Is PEX A Compatible With SharkBite Fittings?

Shark Bite is compatible with many of the PEX pipes used in today’s plumbing industry. There is PEX A, B, & C right now and it seems that except for the one listed in the table above, Shark Bite can work with them all.

The same cannot be said for PEX fittings. They are not compatible with any other pipe brand or type. They can only be used with PEX pipes. That is not a big deal unless you have to remove older pipes to accommodate this product.

Then a move to a PEX alternative like Shark Bite is in order. The latter cuts down the workload as well as leaves current pipes in place. Then the fact that no special tools are required for Shark Bite, that makes the work go a lot faster.

When used for making connections, these two products are the same. They just look different, have different application methods, and can be used on different pipes depending on the situation.

It will be up to your pocketbook and judgment as to which one you will use. Plus, your plumbing situation will let you know which product to pick.

Is SharkBite PEX Type A or B? 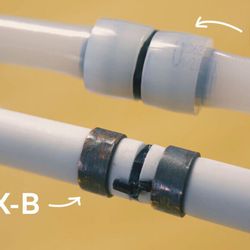 It is probably both and you can add in C there as well. According to the Shark Bite website, Shark Bite can be used on all three types of PEX pipe. Also according to the website, when you look at industry standards, they only refer to PEX and not A, B, or C.

The reason for that is that all three types of PEX pipe are virtually the same. When being manufactured, they all have to meet the same performance standards set out by different industry regulators like ASTM F876, NSF/ANSI/CAN 61, and UL 1821.

Plus, they are all about the same dimensions as they have to meet the copper tube size. In addition, they all have a material designation code telling buyers which level of chlorine, UV resistance, as well as hydrostatic design basis (HDB), or pressure rating.

In essence, the only difference between these types of PEX pipe are as follows:

- PEX A is made using the Peroxide, or Engel, method.

- PEX B is formed using Silane, or Moisture Cure, method. This is the most common PEX pipe type out there.

- PEX C is created using the Electronic Irradiation, or Cold, method of cross-linking.

Then each pipe option is assigned a material designation code with 5 being the top level for chlorine resistance, 3 for UV resistance, and the last two digits 06 representing 630 HDB, or a pressure rating of 160 psi at 73 F.

The highest rating any PEX pipe can get is 5306.

Why are Plumbers Against SharkBite Fittings?

This is a good question that many people ask. They wonder about this since Shark Bite comes with some very good ratings and has a top reputation. Here are some answers to that question:

1. This plumbing option does not always last a long time or is as durable as PEX

2. They work better for temporary fixes, not permanent ones

3. The Shark Bite are expensive to buy and use. If you damage one that is a lot of money out of pocket

4. The O-rings can wear out after about 10 years and start to leak

5. They do not have as many applications as PEX crimp does

Plumbers do not want to ruin their reputation by installing parts that can leak eventually. That is one more reason they avoid using Shark Bite over PEX. Unless the PEX application is behind a wall, or in another tough place, plumbers will use PEX.

They will use Shark Bite in those tough situations and avoid doing all the extra work. Then clients love to save money. Thus using PEX over Shark Bite allows the plumber to pass on the savings.

This move makes the client happy and helps build a strong and good reputation for themselves. These are all practical reasons why plumbers avoid using Shark Bite.

Then when the project is going to be a long-term one, it is better to install long-term solutions. If they install a Shark Bite connection then it is possible that they will have to come back and redo their work.

That is not good for business or their reputation. Also, soldering is stronger than the push to connect option that Shark Bite offers.

Where To Use PEX Pipe 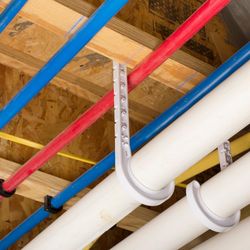 Each version of PEX has its separate applications and they are made for those specific uses. Here are some of those uses where PEX pipe and crimp work well.

A flexible pipe that comes with no coil memory. It can be used with push, crimp, clamp, and press style fitting, as well as expansion fittings. This version is also the most expensive of the three options.

Is the most common option you will find and it has been used in America for over 40 years. Like Shark Bite, it comes with a 25-year warranty. It is not as flexible as PEX A and that more rigid design gives it a higher burst rating.

Also, it has the highest chlorine rating of all three and it can be used with push, crimp, clamp, and press style fittings. If you want to save money, this is the pipe option to use

Not the most common option you will find. Plus, it is not as flexible as the other two options. It is designed to work as a supply line from the source to the faucet but is not that common in behind the wall applications.

Its strength is in being used for radiant heating systems and snow melt systems.

Each has its strengths and weaknesses and Shark Bite's weakness is its expense. Plus, the O-rings tend to wear out too soon. PEX is ideal in that it is very flexible and it can be used for more applications than Shark Bite can.

How To Use a Honey Wagon (Portable and Service) Helpful Guide