Where Can I Boondock? 6 Options for Boondocking in San Diego
I 75 Rest Areas Florida (Maps, Reviews and Where to Rest)
Tag Axle RV: What Is a Tag Axle? (Pros and Cons Explained)
Mice in RV Underbelly or Ceiling: 7 Ways to Get Rid of Mice 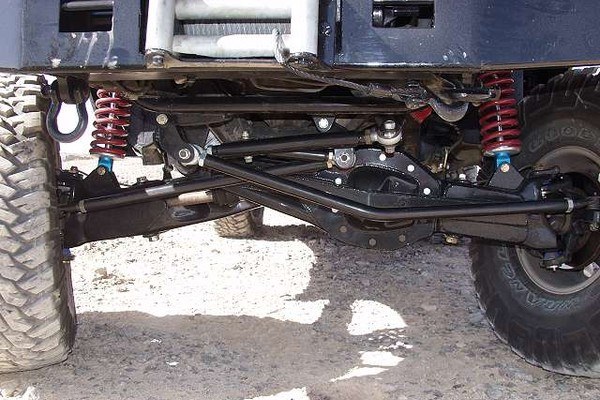 In their effort to provide you with the most comfortable ride possible without losing control over your vehicle, vehicle manufacturers create different suspension systems. These suspension systems may only be available on limited models of cars and trucks.

To learn more about the difference between these two suspension systems, just continue to read our article. It has the information you want to know about so you can tell what kind of suspension you have on your tow vehicle.

As the name describes, you have one single beam going across the front of your truck. There is no pivot in the system like there is for the twin I-beam suspension system. You should find this suspension on the Ford Super Duty chassis as well as the F53 motorhome chassis.

Usually, the twin I-beam suspension was used primarily on 2 wheel drive trucks. You may have seen some solid-axle models on GM or Chevy trucks but that design came when Workhorse took over that line from GM.

Before that, Chevy used an A-frame suspension system but that design made it impossible to use the right size of springs and Chevy had to add airbags to take some of the load off the springs.

You may find the monobeam used in 4 by 4 trucks or other vehicles. It will depend on the type of chassis your vehicle has. 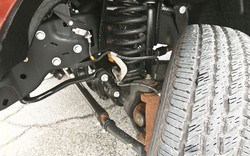 There are 7 parts to the F250 monobeam suspension system. There is the beam or stabilizer bar which is one piece. It goes right across the front of your vehicle. Then there is a need of 1 bushing, 1 bracket, and 1 stabilizer bar bolt.

The stabilizer link is held on by 2 nuts, top, and bottom with one more holding the bushing, etc., together. Before the year 2000, only the F350s had a solid axle suspension system and all the F250s had the twin I-beam option.

However, in 2000, Ford made a change to the body of the F250. When that happened they changed from the twin I-beam to the monobeam option. The F450s also were built with the monobeam suspension system.

This single beam system is said to upgrade the ride and boost the performance of the F250. Also, it makes it feel like a different vehicle when you are driving it. 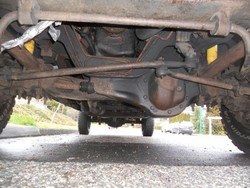 The purpose behind the development of the I-beam suspension system was threefold. This new design, which came about in 1965, was to let the wheels work independently of each other, was to improve ride quality, reduce tire wear, and cut down on your front-end maintenance.

However, the monobeam suspension system is supposed to cut repair costs down even more than the twin I-beam did. Also, the work was easier to do and when you wanted to stiffen up the front end, all you had to do is upgrade the springs to the next level higher.

Finally, the monobeam system is supposed to be stronger than the twin I-beam making it last longer and also reducing repair or replacement costs. If you want rugged handling then the monobeam is the system to use.

The twin I -beam may be better over uneven terrain as you would want your wheels to work according to the terrain and not each other. 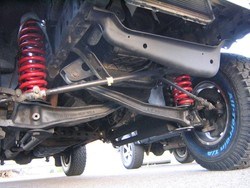 The change has taken place gradually. In 1997 For stopped putting the twin I-beam on its F150s. Other models continued to have that suspension for a few more years. For Ford Explorers and Rangers that change came in 1998.

It wasn’t until a body alteration in 2000 that the F250s had their twin I-beam suspension changed. Some articles suggest that the Twin I-beam is still used in different Ford models.

One article has said the Twin I-beam has been in use up until 2020 giving it a 55-year reign over suspension alternatives. But according to other sources, the twin I-beam suspension was not used by Ford after 1999.

It is a good system as the only real drawback to this system is that the springs get a little weak over time and the tires started to wear a bit on the inside edges.

Does F250 Have Independent Front Suspension? 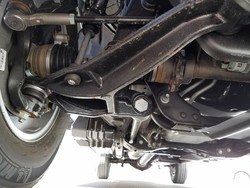 It has been that way ever since, even though Ford may have made design changes to the springs in 2005. They went from the leaf spring design to the coil design which was supposed to help the ride and performance of the F250.

The monobeam suspension is also supposed to help the ride of the vehicle and upgrade its performance. However, monobeams may be stronger than twin I-beam but it may not perform that well over rough, uneven terrain.

If there still is an F250 with twin I-beam suspension you may only find it in the 2 wheel models. The 4 by 4s are supposed to have the monobeam option only.

Car companies are trying to compete with each other and produce the perfect vehicle. That competition makes you the winner as you are getting the best parts technology can create. That means you and your family are safer in most modern vehicles as they come with the best suspension possible.

Twin I-beams are not a bad system, it is just that monobeam seems to be better, especially for towing trailers long distance.

Top Idaho Rest Areas: Can You Sleep at a Rest Stop in Idaho?