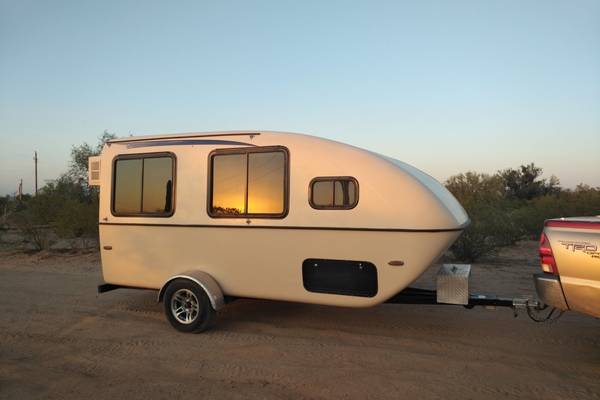 Fiberglass and compactness are the two elements that seem to be grabbing hold of the RV industry as more and more manufacturers are going small and light. The age of the large and luxurious may be coming to an end as those large RVs are pricing themselves out of the market.

These little trailers are snug, comfortable, and have a unique design to them. However, their price tag for the base model may be too steep for some people as they are needing to add $3-4,000 dollars to the approx. $21,5000 price tag to get features that are standard on other brands.

To learn more about the Lil Snoozy camper just continue to read our article. It has the information you want to know about before you make a major camper purchase. There is a lot of competition out there and you want to make sure you get a trailer you will love and use.

How Much Does a Lil Snoozy Cost? 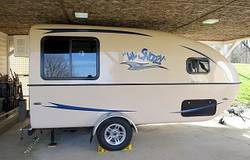 How much you will pay will depend on the condition and year the camper was made. There were supposed to be 14 different floor plans but so far, we have seen only one. One 2014 model is being sold for $13,900 and if you check around, you can find a whole range of prices.

There are a lot of bad feelings towards the Lil Snoozy company as it shut down in 2019 after taking deposits from 45 customers. Those customers placed 40% deposits on the model they wanted and then the company filed for bankruptcy right after.

This is not new news but this action should not affect the value of your Lil Snoozy camper. If you keep it in top shape you should be able to resell it at a nice price.

The new website states that the company is under new owners and that they make their campers in America. However, they don't state the price of their new Snoozy 2 campers. You will have to contact them directly to get a price quote.

Prices will reflect the number of features you want to be added to the camper. Also, this camper comes either with a queen-size bed or 2 twin beds at the front of the camper. The same rear access door remains as does much of the interior design.

One person has complained that while the company may be managed by new owners, it is the exact same trailer, the exact same frame, and the exact same everything that the Lil Snoozy had. You may not be getting anything new with the Snoozy 2 camper.

The company reopened in South Carolina in 2020 and gave the new trailer a 2500 pound dry weight. They also were supposed to have upgraded the axle but kept the original aerodynamic shape. 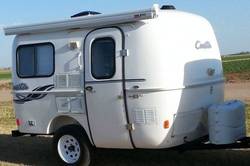 Given each company’s history, you might be better off going with a Casita over a Lil Snoozy. For the price, the Casita new was cheaper than the Lil Snoozy even when fully loaded with some nice features.

The base price for the bare-boned Lil Snoozy was registered at over $21,000, while the Casita came in at $20,000 approx. One of the problems with the Casita was the insulation. Not many owners felt that they had any.

The Lil Snoozy was made with foam under the fiberglass so you knew that you would be protected from either the heat or the cold. The length between the two trailers is probably similar. Casita did not come in long lengths and it was hard to get the customization done.

You could add a lot of features to your Lil Snoozy but you also have to pay top dollar to get those features installed. The Casita and the Lil Snoozy are lightweight trailers and most cars can tow them with ease.

The real question these days is if the snoozy 2 will be better than the Casita or not. The Lil Snoozy campers were electric only.

What Happened To Lil Snoozy Campers?

The original owners went bankrupt in 2019. It is the timing of the filing that has many people upset. The company had just taken orders and deposits from 45 customers right before they filed.

There is a lot of bad blood between the company and most people. Even non-customers were not happy with the way Lil Snoozy handles their business affairs. The 45 customers lost an estimated $450,000 to $540,000 approx.

It is too soon to tell if the new company is going to be any better. They do have their own website up and running but there is very little information on those sites. You do get to see photos of the new Snoozy 2 campers but they look exactly like the old ones.

You may be able to find Lil Snoozy campers for sale. Depending on how many were made your chances to find any for sale may not be that great. You may have to look high and low before you find one in good shape at a reasonable price.

Lil Snoozy Camper Out Of Business 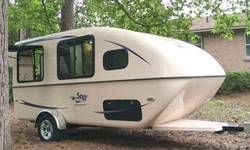 This is true and it took place sometime in 2019. All the particulars are not known nor is it understood why the company took so many orders just before filing their paperwork. But the original owner did not file for bankruptcy.

Alan Smoak has been highly praised for his 5 layer fiberglass design. It included a layer of foam in between those 5 layers and it seemed to hold the elements outside. He was the original owner in 2010 and he sold the company 3 years later to Richard Mickle. What happened to him is anyone’s guess.

There is a new Snoozy company and it has named its trailers Snoozy 2. What is strange is that this new company states that there are new owners yet they are using the same facilities as the old owners.

Even though that warehouse was said to be emptied of everything of value. People have been researching this story but no new developments have arisen yet.

As of 2019, there were 5 complaints made against the company through the BBB. Those complaints dealt with the loss of the deposits while one had their trailer delivered but it was badly wired, missing a couch and they had to pay the freight for the shipping of the couch.

There was also a delivery date delay. The owners canceled and the company promised to sell the trailer to someone else before they would get their deposit back. he sold the trailer but never sent the money to the original customers.

In further communication, the owner of the company, 15 months later, promised to send back $2,500 of the deposit but never did. We checked a Lil Snoozy club that had its own website but every page we clicked on did not come up. The message was that the page could not be found.

If there are more complaints than the ones we have already listed, they may appear elsewhere on the internet. One discussion forum complained about the price and that it was too high for a basic model with no amenities. 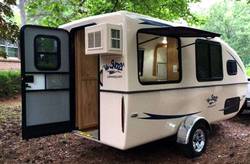 The size of the camper may vary but one 2014 model was measured at 14 feet 6 inches long, 6 feet 6 inches wide and 6 feet 4 inches tall. There was not a lot of space but the open floor design made it seem more spacious than it was.

Another Lil Snoozy trailer, also from 2014 is advertised as very rare and it was 18 feet long, 8 feet wide, and 7 feet 7 inches high. Those were the overall dimensions of this trailer. However, when you looked at the other interior measurements, they are exactly the same as the first 2014 we mentioned in this section.

The bed size was a mere 70 by 63 inches and it was not made for very tall people. The living space came in at approx. 95 square feet. Under the bed storage space measured 75 inches by 5 feet by 25 inches making sure you had some room to place your clothes and other necessities.

What Does Lil Snoozy Weigh?

The camper was actually very light coming in at about 2500 pounds. That meant that most vehicles on the road could pull it safely. The tongue weight was 10% of that value and weighed in at 250 pounds. There was room on the tongue to add a storage box if you needed one.

These trailers were all-electric and had no propane facilities or components. The windows were all screened, there was an 8,000 BTU air conditioner and no heater. A microwave was included and the stabilizing jacks were built into the rear bumper.

Because there was no real toilet in the trailer, just a cassette one, there was no black water tank to worry about. There was a 30-gallon gray water tank and a 25-gallon freshwater tank on board. The cassette toilet held 5 gallons of waste.

A 4-gallon water heater supplied as much hot water as you needed. As long as your fresh water supply held out. For safer driving and towing, the camper was equipped with electric brakes.

There were supposed to be a variety of floor plans but we did not see any more than 2. One floor plan had a wet bath near the access door with the kitchenette right across from it. Then there was a 2 seat couch that was placed opposite of the entertainment center. At the front of the camper was the queen-sized bed.

Another floor plan allowed you to change the queen-sized bed for 2 twin-sized beds. Everything else was about the same. it has been said that the new company has not changed anything and the snoozy 2 is built with the same molds, the same frame, and the same floor plans.

A dinette table may be standard and it is placed in front of the sofa. You would have to sit side by side if you wanted to eat off the same table. 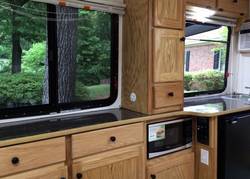 Different listings are advertising these little campers for sale but the dealers either didn’t have any in stock or they were mostly individual sales. The best bet, if you really want a new one, is to contact the new company and place your order.

That is if you can trust them after what had happened 2 years ago. There are different web pages on their website that have contact information or forms to fill out if you want a brochure.

Many of the ads we clicked on either said sold, rare sale, or no results. That is understandable as it is not known how many of these campers were made between 2010 and 2019. The goal was to make 2 to 3 a week initially then moving up to 5 to 6 a week but it is also not known if those targets were met.

You may not have heard of this trailer company as it did not have a long existence Its new incarnation has only been around for one year. These are very basic trailers made for couples at best.

There is not a lot of living space for 2 people to share but the campers are easy to tow making up for the lack of space. if you do not want a large RV to tow, picking up one of these models may be the answer to your camping needs.