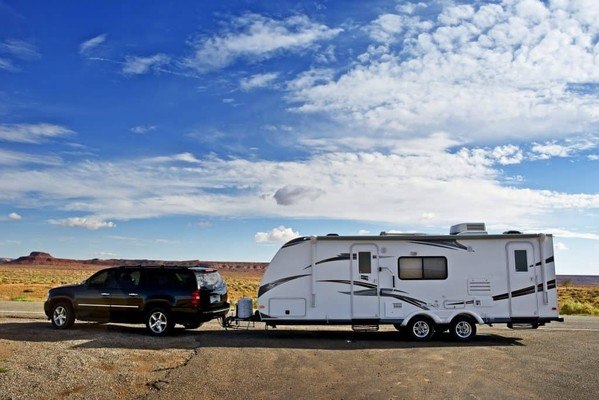 Jayco vs Keystone Quality: Are Keystone and Jayco The Same?

It can be hard to tell the difference between RVs and manufacturers. Some differences are hard to see as they are all behind the scenes and do not show their presence until something goes wrong. Just take your time and do some good comparisons before you buy.

Are Keystone and Jayco the same? It is hard to compare apples to apples when the apples come from the same orchard. This is the situation here as both Jayco and Keystone are owned by Thor. The key to these two RV makers is that they were able to keep their production the same as when they were individually owned companies. That is where the difference will come in.

To learn more about these two RV makers, just continue to read our article. It has the information you need to know about so you can make a good decision at RV buying time. The companies may have the same owners but there are still a few differences between them.

Are Keystone and Jayco the Same? 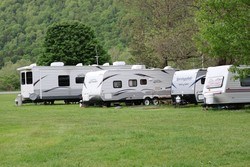 As mentioned earlier, these two companies have the same parent corporation backing them. However, that does not mean they are cookie-cutter outfits producing the exact same RV units. You will find differences as it seems that Thor has allowed the same strategies, production process, and business officers to run their companies as they did before being bought out.

That is why you will find many dedicated Jayco and Keystone owners who do nothing but praise the rig they have purchased from either company. Being under the same parent management team has not diminished the product to the extent that all owners are dissatisfied with their RVs.

Some differences set these two companies apart. One is that Jayco doesn't focus that much on producing travel trailers and often have limited numbers of models available. On the other hand, Keystone is known for having a large selection of different models and they have the size of organization to produce a lot. Jayco not so much.

This is an area where Jayco may have the upper hand over its sister corporation. There are complaints about the quality of the Keystone RVs and trailers with special attention paid to the roof of their rigs. It seems that Keystone will cut corners at the roof level making them weaker than they should be.

On the other hand, Jayco has been praised for its quality of construction, and the owners we saw would not even consider ordering and buying any model other than Jayco products.

If you count quality as floor plan design, then Jayco will lose out to Keystone here. The limited number of models Jayco has for sale also is found in their floor plans. They have a limited amount of designs you can choose from.

That is not always a good business move when you have customers with different lifestyles and habits. Keystone beats that company in this category as it is said that they have a large floor plan design options for you to choose from.

Customer service is lacking at Keystone which may reflect the entire attitude that the company has towards its customers. Jayco takes a different approach and people are happy with the customer service they receive. 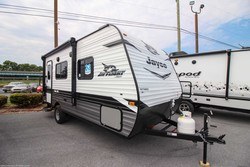 It seems that Jayco has the upper hand in this comparison. That company strives hard to provide its customers with quality materials. Their floors and roofs are made with 5/8” plywood whereas Keystone tries to get away with roof materials as thin as 3/32 of an inch. They have upgraded some to 3/16 but that doesn't equal the strength and power of 5/8 inch plywood.

When it comes to floor plans, the Keystone model may outdo Jayco as it does seem to have a large supply of different ways your interior can be constructed. Also, Jayco tends to use screws rather than nails as screws have more holding power than nails do.

Then the headroom category will also go to Jayco as it seems that the company offers its customers more headroom than Keystone will. There have been other complaints but Jayco’s third-year warranty may be what tips the scale in this comparison.

What one you buy will boil down to your preferences and if you can do any customizing to fit your travel needs.

Both models come in different trim sizes with some being high end and others being at the low end of the scale. The first place to look will be the tires. If the one has great tires, and the other doesn’t that is a point or two in favor of the former option.

Which one is best will depend on the quality of construction and the price tag. If you are going to pay top dollar then the Jayco Eagle should be the better of the two as Keystone is known for taking shortcuts and using inferior quality components.

Even Keystone owners on the Keystone forum will say that Jayco makes good quality trailers. They just have a limited amount of models to choose from. The pin weight may be lower in the Cougar than the Eagle which is a deciding factor for many RV owners.

The floor plan was similar so that is not much of an influential factor and the floor plans may be the biggest difference between the two models. You will have to do some research to make sure the specs are where you want them to be for each model. 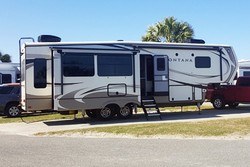 The biggest and most obvious difference will be in the warranty between the two models. While Keystone does have a 3-year warranty on structure, Jayco offers a 2-year warranty on bumper-to-bumper coverage whereas Keystone only offers a one-year policy for the same coverage.

The 5-star handling package that Jayco puts on this model of trailer outshines the Keystone option by far. Then Jayco goes with Goodyear tires which is a deal clincher for many RV buyers. That is one thing you need on a trailer, 5th wheel or not, and Jayco does not disappoint in this category.

The construction quality is another point in Jayco’s favor as they had established good build principles long before Thor bought the company 5 years ago. What may tip the scales in Keystone’s favor is that they do not put a lot of unwanted features inside their luxury 5th wheel while Jayco is said to do that.

Also, you may be able to put more supplies in the Montana as it holds around 4000 pounds on its own. The holding tanks are quite large as they should be with a luxury 5th wheel trailer.

The Jayco Jay Flight is a dual axle pull-behind trailer and one of its primary features are the front and rear doors. You have an extra exit point in case there is an emergency. The Bullet is more aerodynamic with its slanted nose. That may be one key in getting better fuel mileage with this trailer than the jay Flight.

The Bullet is also supposed to be very lightweight which also helps in handling as well as better towing mileage. But Keystone seems to distract away from its construction practices by having a focus on all the features it can provide in this trailer option.

Jayco clearly advertises how they build their trailers and the Jay Flight may not get the same aerodynamics as the Bullet but it is built better to last longer. The Jayco webpage for the Jay Flight highlights the top construction practices they put into their models and that is going to be what makes that RV option better than the Keystone Bullet. 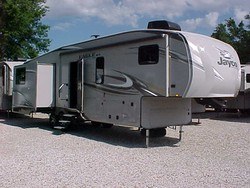 One of the most influential factors in any comparison will be the floor plans. If you do not like the layout or the layout options you can choose from then you won’t like the RV. Doesn’t matter if it is the Laredo or the Eagle. Floor plans are usually what convinces the wife that is the trailer she wants to be in.

While the Eagle is better constructed than the Laredo, the latter option may have more and better floor plans to choose between. That is the essential factor as floor plans will dictate lifestyle to some extent.

The warranty that comes with the Jayco is longer and better than the one that Keystone provides and that two is another top influential factor. Having the coverage you need for a longer-term is always a good deal.

Then owners are reporting that they are having little to no trouble with their Eagles while they cannot say the same thing for the Laredo. The Eagle is probably the better-built trailer over the Laredo and that is what men look at the most. They do not want to pay a lot of money for an RV only to have it not last a long time.

One thing about these comparisons is that they are like trying to compare top trucks from different makers. To some people, a Ford tops a Chevy, while to others Dodge tops the Ford, and then to still more people the Chevy truck tops them all.

That is the way it is with these two RV options. You will have some people promote the one while others prefer another model. One key in this debate is the warranty. Jayco’s is much better than Keystone’s. That is an important element when comparing RVs.

The pass-through storage area on the Jayco may appeal to some but it is also a potential spot for drafts. That may make you feel uncomfortable when you are trying to sleep. Many owners are saying that an RV is an RV and it doesn’t matter which brand you buy, there will always be complaints and problems.

If you have to choose between these two models, the Jayco has better customer service than the Keystone and that may make it the better purchase. Layouts and features are all up to your preferences and you can get just about the same amount in either brand if you are willing to pay for upgrades. 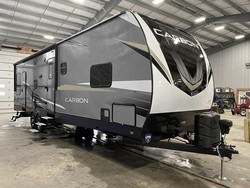 These are toy haulers and there really isn’t much difference between them. The different owners are saying to take a close look at the warranties especially if you are going t live in the unit full time. Many items in the small print can void the warranty so make sure you understand what is being said.

Then Keystone has had the attitude that the Raptor was best for part-time use not full-time. That may be the difference that convinces you to go with the Jayco seismic. The drawbacks to the Jayco can be the finishing construction touch-ups that turn out sloppy.

One headboard was sealed on one side with colored caulking while the other side had a big gap in it. You will have to look at these little details before you buy as they will influence your buying decision as the low-quality effort does affect your lifestyle and budget.

The sad news in all of this is that it doesn’t matter which brand you go with as they are both owned by Thor. Even though the two companies may have some independent management leeway, the overall guiding principles come from the same head office.

With that said, however, it does seem that the people behind Jayco care more about their products and customers than Keystone does. There will be complaints about the RVs and trailers both companies produce but that is par for the course as no company is perfect.

Are Predator Generators Any Good? (Reliability and Review)