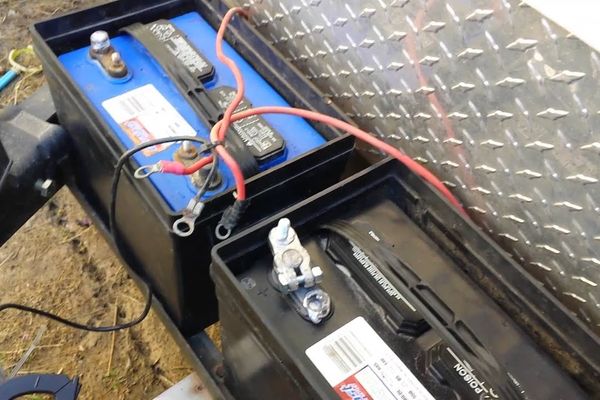 It can be done. If your RV or travel trailer needs more power, then you can get a second battery to give it a boost. The key will be to wire the batteries properly so you do not have a short . Wiring correctly is not hard to do.

All you have to do is make sure you have enough space in the battery compartment, add a new battery box to hold 2 batteries instead of one. Then wire the batteries in parallel fashion so there is no shorts or power drain. The batteries need to be the same as well.

To learn more about this option just continue to read our article. It has the information you want to know about in case you want to increase the power in your travel trailer. Take a few minutes to see how this information helps you.

Can I Add Another Battery To My RV? 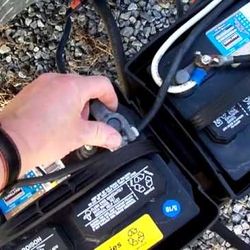 This is a possibility and many RV owners have done just this. They bought two of the same batteries and hooked them up in parallel. They have not looked back since they installed the extra battery.

What the second battery does is share the load demand so your original battery does not have to work as hard. The key is to make sure the two batteries are the same age, type, and size.

If you want to connect a smaller battery then that is not going to be a good idea. It can discharge past the 50% mark quicker and also charge a lot quicker. The latter will cause an overcharge to the battery. When that happens it may boil the water away.

The current flow is to be as identical as possible between the two batteries. This enables them to age the same as well as provide the capacity you think you have by adding the second battery.

While it is possible to use an older battery, it is not recommended as you may damage the older one and not get the current flow you expected. If you are going to add a second battery, add two new ones that are exactly the same.

Should I Add a Second Battery To My RV?

The answer to this question would be do you need more power? That is the main reason why people add a second battery to their RVs or travel trailers. They usually do this for those times when they are camping without shore power.

When you add a second battery, you are not adding more amperage. That part of the electrical system remains the same. What you are adding is more voltage so you have more power to run the air conditioner when you are not connected to shore power.

Or when you want to run the microwave and another appliance at the same time. When you add the second battery, you will have to have it properly vented to make sure it does not overheat on you.

Everything you do for the original battery to keep it safe you need to do to your second battery. That will include buying a second battery box with proper attachments for ventilation and wires. Or you buy a battery box large enough to hold both batteries.

The extra power will come in handy especially with all those power features that are built-in or come with your trailer purchase. The RV makers may not add the second battery for you and it is something you have to do after you buy the trailer.

Installation is not hard but check first to make sure it won’t void your warranty.

What do You Need To Run a Second Battery? 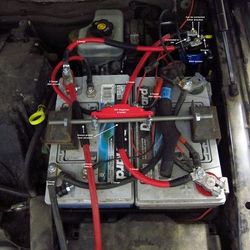 All you need is the right wiring and have those wires connected in the proper sequence. If you are running those batteries in parallel, then you hook the second battery to positive then to the negative terminal on the original or first battery.

The negative will go to the ground. You will also need to have the second battery exactly the same as the first one. Do not add a new one and then attach it to the older original battery. This will cause some problems.

It is best to buy 2 new batteries that are the same and wire them in correctly. That is all there is to it. You get more power when you need it. It can’t be stressed enough that the batteries have to be the same age, model, type and so on.

What that means is you will want 2 12-volt batteries or 2 6-volt ones in the series. Plus, they need to be of the same group, amperage and size. If these factors are different you may see damage done to one or both of the batteries in a short time.

How To Add a Second Battery To My RV

Both ways are okay to use and your expert will tell you why both can be used. When you get ready to do this task, make sure your travel trailer has room for a second battery. It is a common mistake not to check first.

When you go to do the wiring, make sure all the connections and cables are clean and rust or corrosion free. When you add the second battery, it is like adding the first one. You just put the wires where they need to go to make the system work. There are no secret tricks to employ or know about. 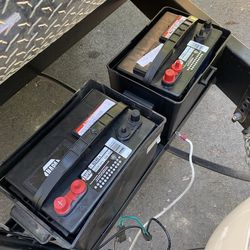 The first step in his process is to analyze your camping situation. You may have a generator for those times you do not have shore power or there is a black out. However, generators can be noisy and create enemies when turned on.

Once you decide that5 you need that extra power, then look at your current battery. Even if it is a few months old, you should get 2 new batteries from the same group, with the same power and so on.

Connecting old with new batteries is not the best way to get that extra power and you will end up buying 2 new batteries eventually. Always try to get the same age, type and group batteries.

This is not going to be a problem as all you are dong is connecting one battery to the next one. It is a simple matter of hooking the power cables to the right terminals. As we said earlier, there are 2 methods you can use.

What some RV and travel trailer owners have done is to replace their standar4d 12-volt battery with 2- 6 volt models. The reason they do this is because the latter batteries usually are cheaper and they provide more amp hours than standard 12-volt batteries.

The best 6-volt battery provides over 300 amp hours of service while one of the largest 12-volt batteries only provides about 250 amp hours. If this is important to you, check your options before you buy.

To wire those batteries, you need to be careful. You will want to move the negative cable first to prevent and shorting of the system. To help you get those batteries wired right, go to this link.

The article there provides very detailed instructions, diagrams and other information we cannot put in this little section.

How To Wire 2 Batteries On a Travel Trailer 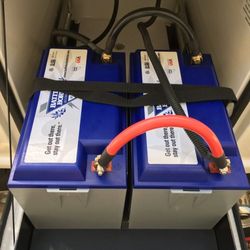 The second battery’s negative terminal is then connected to the ground. This is one way that we have described above. The second way we mentioned earlier is in series and it goes like this:

If you are not comfortable with working with electricity, even with batteries, then get a professional to help you. You want to make sure the connections are done right so you do not have a problem when you are on the road.

People do try to find alternatives as one owner received this answer when he asked about using a battery that was not quite 6 months old: “. If the battery was left on the charger and remained charged, while also being continuously charged from its self-discharge, then the battery cells would’ve been continuously stimulated and have most likely degraded a bit. I would estimate that you’d run into issues within the first two years of use with a second battery.”

While using an older battery will save you money, you have to think about degradation in the cells before you make the connections.

Adding a Third Battery To My RV

Some RV owners have done this as they found that two batteries was not enough power when they camper without shore power. As you will see by the wiring diagrams in the next section, the wiring is not any different than if you are connecting 2 batteries together.

The first step is to buy a large enough battery box. One at an RV dealer, etc., can run you over $100 but you can use a normal plastic bin to do the same thing. That bin may cost you under $10.

Next, you will need to drill some smaller holes for those positive and negative cables to reach where they are to be connected. You do not need holes for the cables going from batteries #3 to #2, and #2 to #1.

Some people put foam around the edge of the bin to cut down on vibration, etc. Once you are done with the holes, make your connections and put the lid on.

Here are diagrams for 2 and more batteries in parallel and in series for you to look at. The first one will be for 2 batteries connected together. 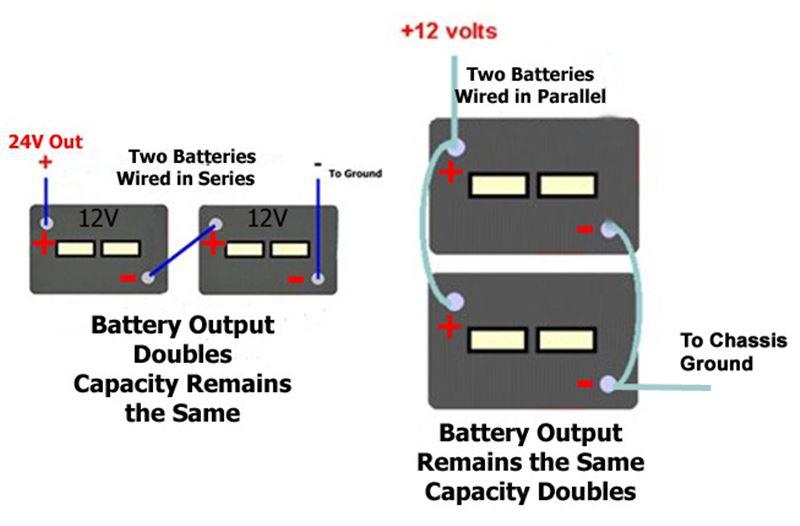 The second diagram gives you a more complicated diagram and has more batteries than three but you should get the idea of how to hook them up.

Pay close attention to the second diagram as it shows the wiring for 6-volt batteries.

Getting extra power is not that hard, nor is it that expensive. All you need are two batteries that are the same and connect them in the right way way. You can decide if you want 6-volt batteries or 12-volt options.

Just pick the one that is right for your camping situation. Then follow the diagrams and instructions on how to set them up and connect them. There is no shame if you do not like working with electricity. Just hire someone who is competent and knows what they are doing.

There should be room in your travel trailer for at least 2 batteries.