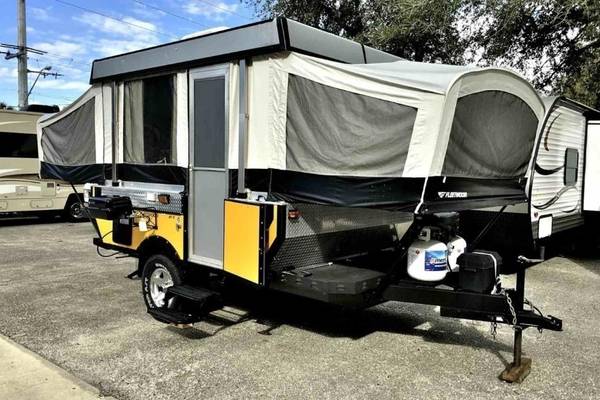 When you go searching to buy a new one or a new-to-you pop-up camper, you may be surprised to find that there are more models to choose from than you originally thought. It can be a time-consuming chore if you didn’t have help.

To learn more about these three models, just continue to read our article. It has the information you want to know about so you can make a good comparison and the right choice. Take a few minutes to see what these campers are all about.

This model of pop-up camper was very basic and simple. 2 queen-sized beds bookend the living space. In between the two beds were the kitchenette and fold-up dinette sets. There was limited storage space inside except for the small counter and cabinets opposite the kitchenette.

On the front of the trailer, there is a nice storage box area that could hold up to 600 pounds depending on the year and model. There is also room on the tongue for 2 propane tanks.

Then the hardtop made sure the rain stayed away from the interior. It was easy to set up and take down with the built-in lift system. The yellow color made it stand out from the crowd.

There was one freshwater tank and it held 41 gallons and the tongue could hold 2 propane tanks up to 40 pounds in total. There were no slideouts to extend the width.

Weight is always a factor when towing a trailer. As reported earlier, the GVWR was 3500 pounds and the dry weight only reached 2285 pounds. Then the hitch weight was a bit low reaching only 265 pounds. The rule of thumb is hitch weight is to reach 10% of the GVWR.

Owners seemed to love the smaller size. It is a basic design that is also very simple but well organized. It is more for minimalist campers who do not like taking everything but the kitchen sink along on their vacation.

The extra cargo box on the tongue comes in handy and allows you to store some equipment or a generator inside if you like having generators along for the ride. The queen-sized beds had about 4-inch thick mattresses to provide the comfort for you.

The ease of use made setting up simple and quick. You did not have to delay your relaxation time once you arrived at your campsite.

One of the biggest differences you will notice right away is that the E-2 is larger than the E-1. That extra living space does make a difference. With folding dinettes, both campers could sleep 6 so there is no advantage either way in this comparison in this category.

One of the special features you will find in the E-2 that the E-1 does not have is the shower/bathroom component. The size of the E-1 simply does not allow for that component to be added to the floor plan.

Another special feature in the E-2 but not in the E-1 is the lone slideout. You get a little extra space once you open the former camper up.

The E-2 opens up to just about 26 feet and closes to just about 21 feet in length. Inside the exterior height reaches almost 9 feet but the interior height is only 6 feet 6 inches, approx. The width is almost 11 feet with the slideout extended. It should be about 7 or 8 feet wide when it is retracted.

When it comes to weight, the GVWR is 4400 pounds with a hitch or tongue weight reaching 400 pounds. The dry weight is 2545 pounds leaving a total payload capacity of 1855 pounds. Subtract the weight of the 41-gallon freshwater tank and the 5.3-gallon black water tank and you will see how much room you have leftover for supplies, etc.

One review said that this model was perfect for a family of 4 and the owner was quite happy with this model. They loved the water heater and the fact that the sink does not fold down. That avoids a mess.

In spite of minor problems, it seems that other owners also loved their E-2, especially the front cargo box. They found that box convenient to haul bikes and other smaller recreational toys.

One drawback that drew a complaint or two was that the manual lift crank seems to wear out or rust a little quickly. That slows lifting and lowering the tent part or makes it a little difficult to turn.

The value of this trailer may seem high to some owners as they paid similar prices for more recent models. NADA has the suggested retail price between $12,000 and $13,000 with a low retail price of just over $7000.

One dealer has agreed with that value and listed his 2007 for $12,995. Of course, to command such a price, the trailer needs to be in top condition. Other owners have decided to follow the low retail suggestion and offer their 2007 E-2 for $7000.

The value will be found in the condition of the camper and what you are willing to pay for it. Different owners will set their own price and a motivated seller may be willing to negotiate just to get rid of it.

Some members of a discussion forum felt that $7000 was too high for a 2005 model so that low retail price may be just right for the 2007.

Neither Coleman nor Fleetwood makes this trailer anymore so getting a replacement canvas through either company may be difficult. You can try the Coleman online store but do not hold your breath.

But, hope is not lost as there are many different companies who make replacement canvas for this and other pop-up trailers. The key will be to compare prices and see how much they will charge.

A quick search using those words replacement canvas will turn up a lot of results and some might even be in your region. The Coleman store will appear as well so you can contact them easily.

Make sure to provide them with accurate measurements so they can quote you an accurate price.

There are two differences between these two pop-up trailer options. The E-3 is about 1 1/2 feet longer than the E-2 when fully extended. Then the other difference is the slideout is a lot larger and goes out a little further than the E-2’s.

Both units have a built-in bathroom/shower area so that comparison brings no advantage to either trailer. There is a third difference and that will be seen when you go to bed. The E-3 has bigger beds than the E-2. More room in bed means a better night’s sleep.

The length when opened, The E-2 reaches just a tad bit over 27 feet and when closed it is almost 22 feet long. The height is about the same as the E-1 and E-2 reaching almost 9 feet on the outside when opened, just over 5 feet when closed, and about 6’ 6” inside.

The 2 holding tanks reach a cumulative 46.3 gallons with the black water tank reaching 5.3 gallons. Don’t forget to factor in this weight as well.

The best words that can be said about any pop-up camper is that it has everything you need inside. Those are good words as the extra length provides you with a larger cargo box in front. A larger box means more toys get to come along on your vacation.

This camper is also said to set up so easily it doesn’t seem like you are doing anything at all. Then the extra space makes it easier to bring the family along. There is privacy and plenty of room for the kids. 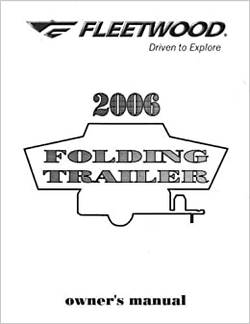 As usual, the first place to look or ask is the manufacturer. Since Fleetwood is still in business, it should have older owner’s manuals on file somewhere. You can check out their list of manuals or contact them through this link.

Then if you want a PDF file this website has one for the Evolution models. Whether it costs or not remains to be seen. You can try the online Coleman store to see if this pop-up was made in partnership with that company or not. You will find their manual link here.

Finally, you should check eBay to see if anyone has listed their manuals for sale. Sometimes they do pop up from time to time.

There seem to be few negative words said about this pop-up camper series. The owners we looked at seemed to love theirs and could do little but praise them. Your experience may be different as when you buy used, you buy other people’s problems.

But it looks like these are well-built campers that have stood the test of time and made it through with flying colors.