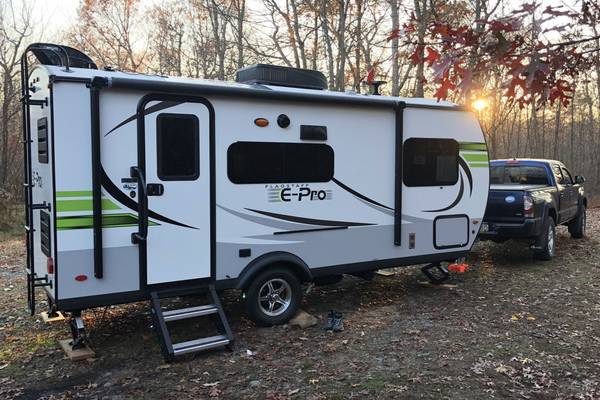 Flagstaff EPro vs Geo Pro: What Is The Difference?

There are some valid reasons why RV makers make the same trailer or RV yet but different names on them. One is to help their dealers sell the same item without infringing on another dealer’s territorial rights. But the trailer is exactly the same.

They are basically the same trailer. There is a slight difference between them though. The interior design and exterior graphics are not the same and that is about it. Both trailers are made by brand names owned by the same parent company and made in the same factory on the same assembly line.

To learn more about these two trailers, just continue to read our article. It has the information you want to know about so you can make a smart purchase choice. Some people buy trailers based on how well they like or dislike the brand name. 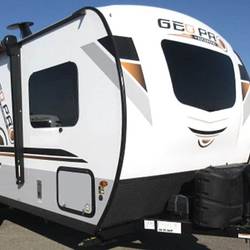 Rockwood began making RVs and trailers back in the mid-70s. As the popularity of RVs grew, the company that owned Rockwood created the Flagstaff brand to sell more trailers with different designs.

However, Forest River bought both companies and streamlined the models and designs. But this caused a problem for the dealers selling one or the other brand name trailers.

It also caused a problem for the company as they could not eliminate one brand or the other without causing severe problems for the dealers for those two brands. The solution was to make the same trailer under the different brand names and only put in some cosmetic differences.

Then the dealers were restricted to selling only one of the two brands. They had to choose which one. This solution helped Forest River penetrate key markets without harming any dealers.

Are Geo Pro And EPRO The Same? 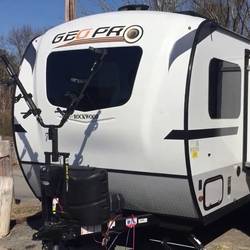 Yes, they are. The differences between them will be minor but they are essentially the same trailer. They are also made in the same factory on the same assembly line. From a business standpoint, this is a good decision to make.

The cosmetic and brand name differences do not cost that much to make but it will save the company as they can buy more of the same parts from the same manufacturer and drive their costs per part down.

This saves them a ton of money and still gets a popular trailer to those people who prefer the Flagstaff brand over the Rockwood brand and vice versa. The biggest difference will be in the color schemes used by each brand for these two trailers.

You might have different flooring designs as well as built-in counters. Other than that, they are the same.

What is Flagstaff E Pro? 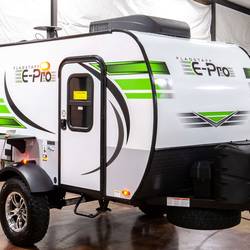 This is a travel trailer that comes with about 9-floor plans to choose between. These floor plans help meet different customers' preferences and makes sure they get the living space they require.

The hitch weight varies but remains between 350 and 600 pounds for all floor plans. Depending on what is available and the floor plan you want, these trailers go between 16 feet and 22 feet. A couple of dealer stock options are smaller than 16 feet in length.

This trailer is supposed to provide the ultimate in comfort through its design and standard features. Those features include Bluetooth and a USB port to name just two. 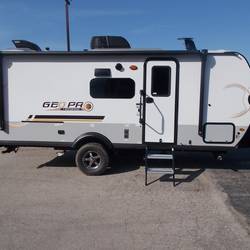 There are a few differences between these two trailers. We have looked at side-by-side images and while these differences are easy to spot, they do not change the structure of the trailer.

For example, the differences can be in window design with one having one style of window in one spot, while the other has two different designs in another. Yet, the door, storage pockets, and other items are in the same location.

Two trailer models have almost identical exterior graphic designs even though they have different brand names. If you are not paying attention, you may think they are the same as the 5th wheel options are almost identical on the outside.

They will also share common appliances and construction materials so you may not spot any difference between the two once you get inside. 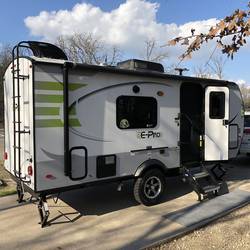 This is comparing apples to apples. The two trailers have the exact same floor plans and even the same model is unavailable at the same time. All the specs we mentioned in the previous section are present and the same for the Rockwood Geo Pro.

Then with the company using the same construction materials, the same appliances, there is really nothing to compare. Even the craftsmanship will be as good or as sloppy between these two trailers.

So far, the only difference we saw was that the Rockwood version may be a bit lighter than the Flagstaff version for the same models. But we double-checked and that was not the case.

Do not be fooled by the different brand names. Because so many brands are owned by the same parent company, you are not getting a unique travel trailer in many cases. You are just buying a re-branded option that may fit your needs and brand preference.

It is a way for these companies to save money and boost their profits. They can cut costs while making the same trailer available to more people. These two trailer models are prime examples of this practice and don’t be surprised if this practice is industry-wide. It is good for business.

Coach-Net Reviews: Is Coach-Net Worth It? (Cost, Benefits)