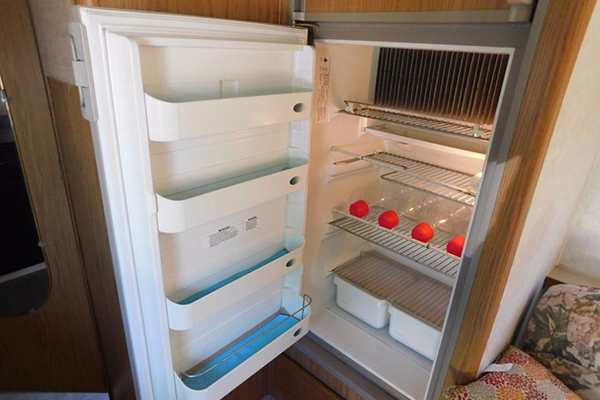 RVers, campers, and people who just like to travel in general already know how important a fridge is in an RV unit. After all, a camper has to eat. Luckily, most RV manufacturers have high-quality refrigerators installed in their vehicles, and more often than not, they work just fine. I, of course, have had an RV for years, and my fridge is working without any issues. But what should I do if I hear my RV refrigerator making noise? Who do I consult; what steps do I take to fix this problem?

What to Do When You Hear Your RV Refrigerator Making Noise

The first obvious step is for me to discern what type of noise it’s even making. Different sounds can mean different things. I should also check if that’s the only problem my RV refrigerator is having because anything beyond noise can require a completely different approach. 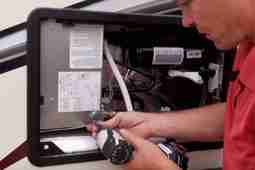 Most people who are into RVing complain about the fan noise. However, more often than not, the fans are rather quiet. If this issue arises, normally I’d check where the fan is located, and more importantly, what’s around it. For example, some models of RV fridges have their chargers or converters located just below the fan, and they’re the ones making noise. On the other hand, the fan itself could be a model that’s not suited for the fridge, so it’s vibrating because it’s loose. If that’s the case, my first step would be to replace the fan as soon as possible.

I’ve had Norcold refrigerators for a long time, and people would often ask me about the humming or clicking noise they make. Some Norcold fridge models happen to use fans, and they tend to hum, though this is not out of the ordinary. More often than not, it’s just the fridge doing its thing. For anyone worried about the hums, I’d probably suggest just replacing the fan.

Dometic has some fridge models that can, indeed, be quite loud. Unlike Norcold models, most Dometic refrigerators use fans. Therefore, a solution a lot of people suggest, including me, is to replace the fan. If possible, buying a Dometic fridge with a compressor is also an option. However, they are a bit more expensive than the ones without it. 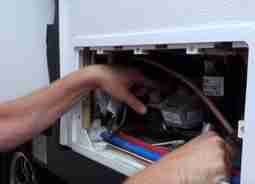 Another common complaint I’ve heard often is that RV fridges gurgle. Most of the time, this is nothing more than the sound of liquid passing through. But it can also be air stuck in the pipes.

There are several solutions to this issue, with the simplest one being to replace the cooling unit. However, that will cost a pretty penny, so I often do a variation on the process called “burping.”

First I disconnect the refrigerator and turn off the gas line. Then I remove the screws on the inside of the fridge, as well as at the rear bottom end of it. After that, I get a friend to help me flip the fridge first on its side, and some eight-ish hours later on its top, then on its left, and then back to normal. Finally, I reinstall everything back and get it to work again. It’s a long process, but it saves a lot of money on repairs.

RV Refrigerator Making a Gurgling Noise and Not Cooling Food

The process for this problem is the same as the one I described above. Most of the time, the ammonia solution inside the fridge is moving unevenly and has to be “shaken up” a bit. However, there is one thing to look out for. One of my old fridges had yellow spots and some rust-colored water leaking out. Flipping the fridge won’t help here, and the best thing to do is what I did immediately after seeing this – start shopping for a new refrigerator.

A good indicator of this problem is the smell of ammonia. It doesn’t even have to be a strong smell, just noticeable enough.

Just like gurgling, the clicking is also likely the sound of liquid doing its thing, though it can be the sound of the fan. To cut a long story short, I again suggest either flipping the fridge or replacing the fan. Should the clicking persist after this, it’s best to consult an expert. 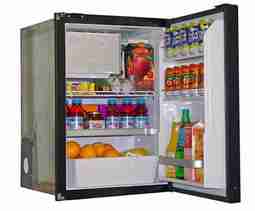 Out of all of the issues listed in this text, humming is probably the least important one. I only say this because a humming refrigerator is very common and in 90% of cases, the humming is harmless. For example, I have a spare fridge that a cousin of mine uses, and aside from humming a bit, it literally has no other problems.

The hums can come from either the fridge fan or the electric converter fan. Disconnecting them and replacing them with a quieter fan model is the way to go, though it will cost money. Naturally, the safest bet is to take the fridge to the manufacturer or a repairman so that they could provide their estimate.

Another possible issue is the mode the fridge is running on. It can run on either AC, DC, propane or gas. If a fridge has more than one of these modes, disconnecting any of them can help solve the humming issue.

An RV Refrigerator Making Noise Doesn’t Have to Spell Trouble

As an RVer, I put a lot of effort into taking care of my vehicle. Of course, the refrigerator gets as much attention as any other appliance I use. Some of the noise that the fridge makes is usually normal and doesn’t bother me. However, once it’s coupled with a different problem or is louder than normal, I take immediate action, and so should you.