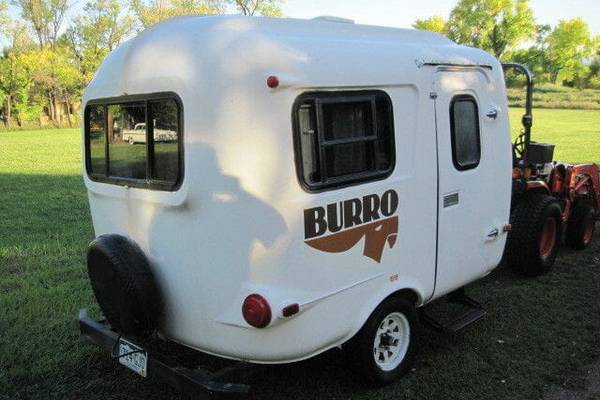 When you don't need a lot of luxury or features, you can always go small. There are plenty of smaller travel trailers made over the years and these small trailers were lightweight. That made them easy to tow while not sacrificing any comfort.

The Burro travel trailer is a simple, basic little trailer that didn't provide any frills. It was made for only 2 people and the amenities were not that many. The photos that we saw showed that there was a dinette, kitchenette, and a bed inside. We did not see any evidence of a bathroom.

To learn more about this tiny travel trailer, just keep reading our article. The company’s history was short but it was filled with many legal issues and bad business management. One person claimed to have led the charge in putting the owners out of business. 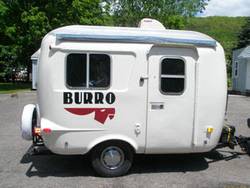 The company was only in business for about 12 years so this trailer option may be hard to find. Its build date was in the middle of the first run of this business, which ended in 1986.

It came with double-wall construction, storage space under all the seats, and a sink that used a hand pump to get the water from a small 10-gallon water tank. The two 12 volt marine-grade batteries supplied the power to run any electrical device that was built in.

Unfortunately, there is no bathroom which does make traveling a little more difficult at times. However, while these trailers are small, many people pick them up to renovate. They make great little restoration projects and are quite durable. Plus, they are easy to tow.

If you are on your own or only have a partner, these might make for a great camping trailer. Small and basic gets you close to roughing it without having the work of roughing it. 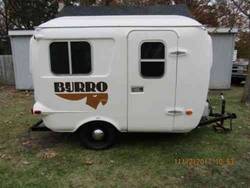 One owner reported that their 1982 model weighed only 1,100 pounds and it may have been the 13-foot trailer Burro made from time to time. The unique thing about this company was that it sold its trailers in 2 ways. the first way was completely built for you.

The second way was a put it together yourself kit. it is hard to say how much you saved by putting the trailer together yourself. No matter how you got your trailer, you had a lightweight RV that could be towed by most vehicles without any problem. 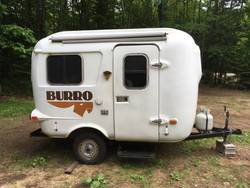 There was talk a few years ago about a company resurgence but it seems that with the legal issues surrounding the second incarnation, both the owners and the molds disappeared.

In the first rendition of the Burro travel trailer company, 1978 to 86, their plant location was in Iowa. it is not sure why they shut down initially or why they moved to California. But they did and their California plant did not start production until 12 years later.

The plant was supposed to be in Escondido just north of San Diego but the 2nd rendition of the company did not even make it 5 years. It lasted from 1998 to 2001. As far as anyone can tell Burro Travel trailer was simply Burro travel trailer.

There is no mention of a parent company at any time guiding the workers. From what can be found out is that a group of disgruntled Burro trailer owners got together and forced the company out of business.

These owners were not happy with the quality of the construction and fought to get their money back as well as end the production. From what can be gleaned on the internet, the owner may have only been one individual but it is hard to say for sure. 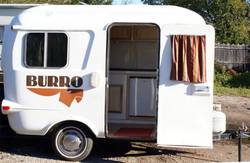 There is a lot of mystery surrounding this company. What information can be found states that in the early 70s a man or maybe a couple of partners started making trailers called the Cloud. This makes sense since it was produced in St. Cloud, MN.

The company then moved to Iowa until 1986. The problem with this story is that it is hard to verify as there are many different stories on the internet. it is hard to tell which one is telling the actual truth.

The California production facility did not start until 1998 and ended in 2001 but some people are saying that the company was there in the mid-90s as one owner picked his trailer up in Escondido at that time and it was brand new.

According to the guy who has bragged about putting this company out of business, there were over 30 design and structural flaws that made this trailer vulnerable to damage. You can read his short account at this link.

Another reason the company went out of business is that the repair costs were more than the company could handle. 20 years after the company went bankrupt, one person felt that if they had fixed one design flaw, they would have had a winner of a trailer. Not the loser the Burro turned out to be. 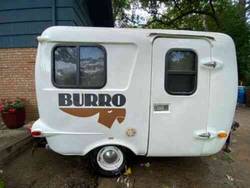 To put it bluntly, there are no new Burro trailers. The company has been out of business for 20 years and the last word is no one knows where the owner or the molds are. If you want a Burro travel trailer, the only way you can get one is second-hand.

Believe it or not, there are still a few in existence and they make their way to the classified pages from time to time. if you work through a dealer, you may have to question their selling price as one 1998 model is being sold for $24,000 approx.

It is refurbished though so that may be the reason why the trailer costs so much. Other people pick these trailers up to restore them and you can find project options for less.

The sizes these trailers come in vary. Starting from 13-foot, the models can go up to 21 feet in length. We have seen almost 15-foot lengths, 16, and 17-foot options as well. it may take a little searching to find this brand of travel trailer if you are looking for something to do in your spare time.

The biggest problem they had was that the mold would split in the center causing a lot of water leaks.

There are different places you can look. The go-to options are online classified ads and Craigslist. These are tried and true options that make hunting down a specific travel trailer or RV a lot easier.

The prices of those models will depend on the owner. That goes for the many dealers who have some on their lots. Each dealer may appraise the trailer differently providing you with a full range of prices.

One dealer had them averaged out to between $4000 and $9000. if you are willing to put some work into the trailer, it won't be too hard to find some trailers selling for under $5000.

If the trailer has been taken care of by its previous owner(s), then expect to pay closer to $10,000 The year of the trailer will play a large role in how much you will spend. those older, first rendition trailers are not selling for a very high amount, even at the dealers.

Don’t forget to check RV discussion forums and other RV-related websites. They often have these trailers advertised through their web pages.

The Burro travel trailer seems to be well-liked by most of its owners. There were a few who did not like them so they took matters into their own hands and caused the company a lot of problems.

We would say more but the complete story is not being told. If you do decide to buy one, you do have a nice restoration project on your hands. They are still good trailers despite any flaws. Flaws can always be fixed.