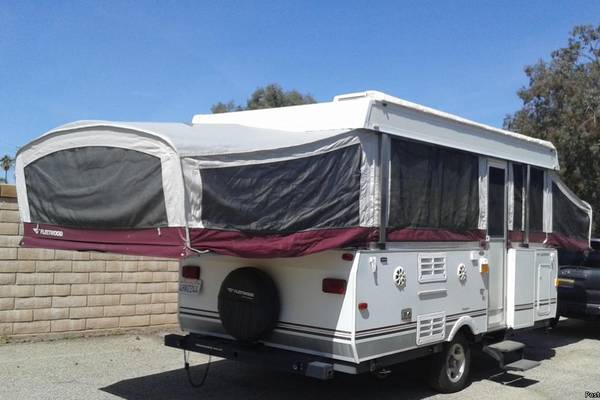 One of the places to start to answer that question is to read the reviews. These opinion pieces will give you an insight into an owner’s experience, and let you see a snippet of the actual quality of the pop-up camper. But you won’t know for sure till you take the plunge and buy one for yourself.

Are Fleetwood Niagara pop-up campers any good? Some people equate this question with the great Ford/Chevy/Dodge debate. Everyone will have their preference. However, the Niagara seems to be well-built, of better quality, and more durable than most modern pop-up campers.

To learn more about this model of pop-up trailers, just continue to read our article. It explores the issue so you have a clearer picture of what the Niagara is made of and how good it actually is.

The fact that the Fleetwood/Coleman partnership or company does not exist anymore is the first thing anyone mentions when this topic comes up. The participants in those discussions are more worried about getting replacement parts than they are about the quality of the build.

But what can be diagnosed from these discussions is that when in business, this company made some really good pop-up campers. They are so good that many prospective campers buy them up in a heartbeat.

It has been said that these campers are better constructed than Jayco models or any other competitor’s models. One reason for that is that the Coleman/Fleetwood company did not use standardized parts in its construction process. They used parts that were probably built to their standards.

What is good about that is those parts were built by different companies still in business and still making them today. That means while this company is no longer functioning, you can still get replacement parts.

With that said, many owners have reported that they rarely needed new parts because their trailer was well-built, solid, and well maintained.

The pop-up camper may not be new anymore but it still has the power to attract potential buyers. That is the reputation of this company and the quality of their product. Coleman knew how to build great campers.

Inside the company provided its customers with lots of storage space. Under the dinette, the beds, sofa, and other locations, you could find a spot for your gear and supplies.

The living space was good as the interior was well organized and spacious. Then if you got a model with a slideout, that was a bonus living space making camping more fun. Also, the many windows made this camper very airy and light. You should not feel cramped or closed in as the light just made everything look bigger than it really was.

Outside, you had extra storage boxes, including the one behind the propane tank holder on the tongue. Then the solid wall bathroom provided you with the right amount of privacy.

The one drawback to this camper was the roof. Coleman/Fleetwood could not overcome the challenges of constructing a good roof and their ABS option was not the answer to their struggles.

You will get different specs for different sized models and different years of production. The following specs are for the 2009 model:

The camper weighed in at 3500 pounds when empty but you could add an additional 600 pounds of gear and supplies. This meant you needed a good towing capacity to get this camper to your destination.

This camper came with a good AC system and the hot water heater held 6 gallons of water. Also inside were 2 king-size beds and one dinette sleeper letting you tuck 6 people into bed at night.

Overall length expanded to 26 feet and it had one slide out for extra width. The appliances could run off either propane or electricity with the small fridge able to use battery power as well. A toilet and shower were included because this was a Niagara high wall model which is rare.

How Much Does a 2006 Fleetwood Niagara Weigh? 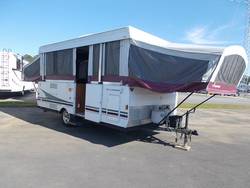 According to NADA Guides, this year of trailer weighed in at just over 3000 pounds. To be exact it was supposed to weigh 3055 when empty. This was one of the heaviest models that Coleman/Fleetwood produced over the years.

The High Wall version had more features so it boosted the weight by some 500 pounds. The Scorpion S1-4048 was supposed to be heavier than this model. It came in at almost 4000 pounds, 3850 to be exact.

The Sequoia, which was in the same Highlander series as the Niagara weighed 2865 pounds and it had the same dimensions as the Niagara. Both were 26 feet 10 inches in length, 7 feet 5 inches wide, and both could sleep 8 people.

When closed you had an overall length of roughly 19 feet and a height of 5 feet 3 inches. The layout for their camper models seems to be very similar with few variations except for the toilet/shower combination. It may or may not be part of the total package.

How Much Is a 2007 Fleetwood Niagara Worth?

We took a look at several of these models on sale through an internet dealer and they all come fairly close in asking price. 2 were at or close to $10,000 while the rest settle in at around $7500 to $9000.

This is their asking price. You may be able to negotiate a better deal since parts may not always be accessible. The ones priced at $10,000 had the combination shower and bathroom built-in and the owners say that this is a rare feature for most of the campers in this model year.

The features in all the models were similar but that bathroom installation made the biggest difference in price. The slideout did not add a lot of value as one of the cheaper models had one.

In the end, the value of this trailer will be up to you. If it fits what you need and has working components then its worth is around the mark set by these owners. You may have some negotiating room but do not go too low or you might lose the opportunity to buy this trailer.

Finding a Fleetwood Niagara For Sale 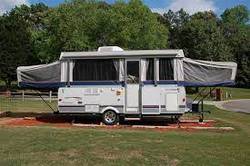 No matter the year, this does not seem like a problem. In basic and quick searches for information, we were inundated with websites selling this model. Some of the websites seem to be helping owners sell their own camper and others were dealers looking to unload their used stock.

RVtraders, Smartrvguide, Zervs, and RVUSA were the ones on the first results page and they listed quite a few of these trailers for sale. While they are very good campers and well-built, it seems that the owners want to upgrade and go to a newer model with better, more advanced components.

Then if you do not want to go through those websites, you can also try the different RV forums. They usually have a classified section where owners can put their campers up for sale.

You are not going to have difficulty finding one for sale. The difficult part is making sure the trailer is in good shape, at the price you want to pay and how close it is to your location. Other than that, you have a fine selection to choose from.

The best place to go for manuals is the source. In this case, it would either be Fleetwood or Coleman. Both companies do have websites with the latter being their online store. That store lists the manuals they have available.

For the Fleetwood option, click here and for the Coleman store, click here. For a 2004 model year, you can find all the different models made by Fleetwood on this website. The Niagara is included but you have to scroll down a little bit to get to it.

Some websites only offer individual years which limits the access for many Coleman/Fleetwood owners. You can try your own search to see what pops up for you but as we said, contacting the source is usually the easiest and fastest way to get what you need.

Some websites just say the generic pop-up manual and you would have to click on each site and search them for the exact manual you need. This can be time-consuming but it may be your only option in some cases.

The first place to check would be the Coleman online store. They have many parts for sale that should work for your Niagara camper. Then you can check with Fleetwood also. Both companies are linked above and you just have to search their sites or contact them directly to get information on spare parts.

Hannah RV & Trailer Supply company has 2 pages of parts for the Coleman/Fleetwood campers. If you do not see the one you want, you should take the time to contact them. If they can’t get it maybe they know someone who can. Just click here to search their website

Also, you can check the different pop-up discussion forums. The owners there will always have leads on where to find parts. Some parts were made by different companies and you would have to get their specific name and contact information to get the part you need.

Word of mouth is sometimes the best way to find anything, including how good a camper is. Also, check Craigslist and other online classified ads to see if parts are being advertised.

You can always check with your local RV dealer or parts companies to see if they stock any. National chains like Camper World, etc., may also have something that can help you out. 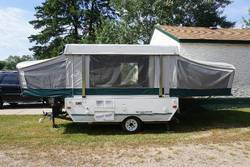 We checked the Fleetwood website and it seems that the company is no longer building pop-up campers. Their main business interest is in building and selling luxury Class A RVs and those vehicles are the only ones listed on their website.

The company also does not make travel trailers, Class C or B RVs, and so on. They are a 60-year-old company that has focused on only one aspect of the RV industry. Coleman does not seem to be making any either.

Also, it seems that after that partnership ended, Coleman tried to partner with Viking but for some reason, Fleetwood blocked that business move. You can try to see if there is a Dutchman/Coleman connection as that is a possibility.

Contact Coleman to see if they are still making any pop-up campers today through different licensing agreements. If they are not, you can still enjoy owning one of their earlier models as many seem to be well taken care of by their owners.

From our research, this partnership between Fleetwood and Coleman seemed to have produced top-of-the-line, well-built, and very nice pop-up campers. The Niagara was just one of the many models they produced that have prospective buyers placing deposits on them before anyone else can buy them.

That is saying a lot about the camper and its quality. The hard part will be finding parts for the used trailer but since Coleman has an online store, they may be of some help to you. It never hurts to ask and asking may get you some great leads.

JT Strong Arm vs Steadyfast RV Stabilizer (Which is better?)

Grand Design Transcend vs Imagine: What Is The Difference?