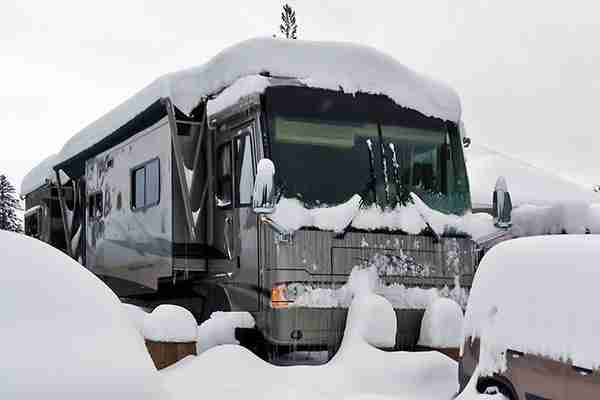 How to Winterize an RV With Antifreeze (The Complete Guide)

If you own an RV, then you must know that this type of vehicle requires winterization. Now, there are several ways to winterize an RV, but the safest way to do it is with RV antifreeze.

If you’re not sure how to do this, don’t worry. We’ve prepared a complete guide on how to winterize an RV with antifreeze. Furthermore, we’ll also answer the most commonly asked questions regarding RV antifreeze, so by the time you’ve read our guide, you’ll be able to winterize your RV like a true pro!

The Basics of RV Antifreeze

Why use RV Antifreeze

RVs are practically like small houses on wheels. They have toilets, drains, pipes, etc. During the winter, these water lines can easily freeze in the cold temperature.

If you would like to keep your waterline from freezing in the cold weather, you should always winterize your RV with RV antifreeze.

When should you use RV Antifreeze

Antifreeze should be used throughout the year. However, you need to make sure to use antifreeze, especially in the winter, when the temperature is constantly at a freezing point. By winterizing your RV, you’ll keep the water system running smoothly all year round.

There are two types of RV antifreeze:

Propylene glycol antifreeze is sold at RV shops. It usually costs $5.00 – $6.00 per gallon. This type of antifreeze is non-toxic so it’s safe for all RV plumbing. It’s also not flammable and won’t damage your RV’s plumbing system.

What’s even better, this type of antifreeze works as a kind of lubricant, and it will also help extend the life of all the seals in your toilets and faucets. For this reason, propylene glycol antifreeze is the best antifreeze to use for RV winterization.

RV Antifreeze Ingredients: What is it Made of?

The ingredients in propylene glycerol antifreeze are:

How Does RV Antifreeze Work?

RV antifreeze is used to keep the water system in your RV from freezing and bursting. It works as a kind of lubricant that coats the pipes.

If you buy a brand of antifreeze for your RV based solely on how cheap it is, you may end up with a big problem. Cheaper brands tend to expand and solidify, which puts an enormous amount of pressure on the pipes. When you’re buying antifreeze, you should check the label for brands that provide burst protection suitable for your region’s lowest temperatures.

You’ll end up spending more money on the antifreeze, but you’ll save a whole lot of cash by preventing serious damage to your pipes.

What’s the Difference Between RV Antifreeze and Regular Antifreeze?

Needless to say, you should never use regular antifreeze to winterize your RV.

How to Winterize Your RV With Antifreeze 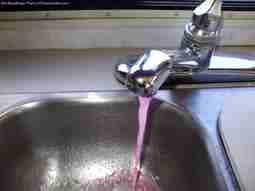 There are several steps required to properly winterize your RV.

Drain all the water

The first thing you need to do is to drain all the water from the fresh water holding tank by opening the petcock. Once you’ve done that, it’s time to move on to the black and gray holding tanks. Flush both tanks, and then clean them thoroughly.

Next, open all the hot and cold water faucets until all the water is completely drained. The best way to check if it’s all gone is to flush your toilet a few times.

Blow out any remaining water

In order to get rid of any water that’s left in the water lines, attach an air compressor to them. You can use a regular air compressor that you use to inflate your RV’s tires. Blowing out any remaining water will keep the antifreeze from diluting.

Once you’ve finished, detach the air compressor, close all the faucets and the petcock, and replace the caps on all drains in your RV.

When you’ve finished with the kitchen sink, move onto the shower, toilet, bathroom sink, etc.

How Much Antifreeze do I Need to Winterize My RV?

The amount of antifreeze you need in order to winterize your RV varies depending on the size of the vehicle, and the length of the water lines.

Usually, two-three gallons of propylene glycol antifreeze is enough. However, if you’re not planning on bypassing for your water heater, you will need at least six extra gallons of antifreeze.

How Much RV Antifreeze Should You Put in Holding Tanks?

You should put approximately two gallons of antifreeze in your RV’s holding tanks. However, this, of course, depends on the size of the tank. With a smaller tank, you may only need to use one gallon of the substance.

Can I Put RV Antifreeze in My Freshwater Tank?

Yes, you can put antifreeze in the freshwater tank. In fact, you should. 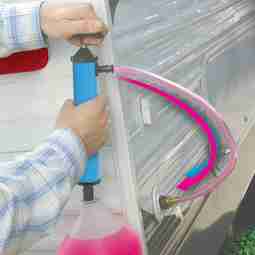 The best way to winterize your freshwater tank is to screw a blow-out plug onto your water connection. Drain the tank, and then close all the faucets and drains. After that, connect a compressed air supply to the adapter with an air chuck. Next, open each faucet, one at a time, starting with the one closest to the pump.

Keep the faucets open until there is no more water coming out.

Once you’ve done that, put two gallons of RV antifreeze in the tank and then run the pump and open each faucet a little bit.

Do You Put RV Antifreeze in the Hot Water Tank?

You don’t need to put antifreeze in the hot water tank. However, if your RV doesn’t have a bypass system, you will end up using at least six additional gallons of antifreeze.

No, RV antifreeze won’t hurt your water heater. RV antifreeze is specially designed for all the water systems, and it doesn’t contain any damaging chemicals.

RV antifreeze has a smell and taste similar to maple syrup. Although it’s not overpowering, you can still taste and smell it if you don’t flush it out properly.

In order to properly flush RV antifreeze, you need to hook a water hose to your garden tap, or if you are at a campground, to the city water tap, and connect the other end to your RV’s water intake connection. Then, open the gray tank and turn on all the faucets. You need to keep flushing the water until it looks and smells clean.

If you can still taste and smell the antifreeze taste, you should add a box of baking soda to the drains. You can dissolve it and pour it down the drain, or just pour it directly and run the water.

Where Should You Dispose of RV Antifreeze?

Unlike regular antifreeze, RV antifreeze is non-toxic. That means you can easily dispose of it in a septic system.

How to Pump RV Antifreeze

There are two ways to pump RV antifreeze:

First, you need to attach your RV’s city water inlet to the outlet hose of the pump. The pump intake hose then needs to go into your container of antifreeze.

Next, you need to open all the water lines and start pumping until the antifreeze comes out through the faucets. Remember, do one faucet at a time.

The water pump converter kit works just like a hand pump, except you won’t have to be doing all the pumping by hand. Instead, you just need to turn on the water pump to ingest the antifreeze into the system.

Ultimately, using a water pump converter kit is much easier, and it gets the job done faster. Since you’ll be winterizing your RV every year, you should consider buying this kit, if you don’t already own one.

How to Get RV Antifreeze Taste Out

If you can still taste and smell the antifreeze taste even after you’ve flushed out the antifreeze, you should add a box of baking soda to the drains. You can dissolve it and pour it down the drain, or just pour it directly and run the water.

If you can still taste and smell the antifreeze after you’ve done this, you need to repeat the process any many times as possible, until the smell/taste is completely gone.

As we mentioned, RV antifreeze isn’t dangerous when ingested, however, it’s not all too pleasant to drink.

Can RV Antifreeze Go Bad (How Long Does it Last)?

Basically, RV antifreeze doesn’t have an expiration date, which means it doesn’t go bad. You just need to remember to keep it in an airtight bottle so it doesn’t get contaminated. It’s best to keep it in the original packaging.

Can RV Antifreeze be Reused?

Yes, RV antifreeze can be reused if you manage to seal it in an airtight container after you’ve run it through your water system.

Does RV Antifreeze Freeze (at What Temperature Does it Freeze)?

RV antifreeze usually doesn’t freeze until the temperature drops to -50. However, it depends on the brand. Basically, the more water that's mixed with it, the higher the temperature of freezing.

Is RV Antifreeze Poisonous to Dogs?

Since RV winterizing fluid is non-toxic, it’s not poisonous for dogs to ingest it. However, since dogs are more sensitive to certain substances, if your dog does ingest some RV antifreeze, you may want to take it in for some blood work, just in case.

But there’s no need to panic, antifreeze for motorhomes is perfectly safe.

Yes, antifreeze for RV water systems does eventually evaporate over time. However, it takes much longer for it to evaporate than water.

How Much Does a Gallon of RV Antifreeze Weigh?

The best natural antifreeze for RV’s is the one that contains propylene glycol.

Is there a Drinkable Antifreeze?

Yes, a drinkable RV antifreeze does exist. In fact, any RV antifreeze that contains propylene glycol is drinkable. However, it may cause side-effects similar to the ones you would have after drinking an alcoholic beverage.

Any antifreeze that contains alcohol is flammable. However, propylene glycol-based antifreeze is not flammable.

What Color is RV Antifreeze?

Does RV Antifreeze Stain? (How to Remove Stains) 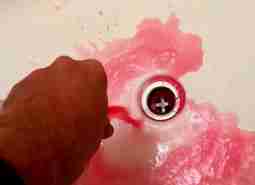 Yes, RV antifreeze leaves a stain if you spill it on your clothes. However, you can remove it in a few simple steps:

How Much Does RV Antifreeze Cost?

Propylene glycol-based RV antifreeze usually costs $5.00 – $6.00 per gallon. However, it depends on the brand.

RV antifreeze can be bought online, and at stores such as Home Depot and Walmart. However, the best place to buy RV antifreeze is at your local RV shop.

Remember, winterizing your RV every year is crucial and will keep your vehicle running smoothly for many decades to come. That's’ why you should go to your local RV shop and buy this amazing substance so you can enjoy your RV to the fullest!

How to Build a Foamy Camper (Foamie Camper Weight and Guide)

Semi Truck RV Conversion: Can I Pull an RV With a Semi?