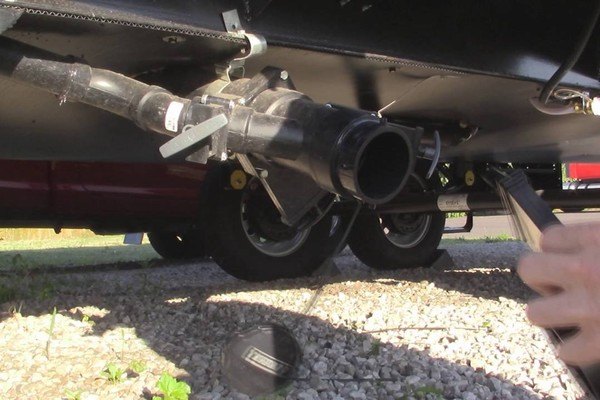 Why Do I Have 2 Grey Water Tanks? (How to Connect-Equalize)

No matter how you slice it, having 2 gray water tanks is better than just having one. There may be some extra work involved in emptying them but that is a minor issue that does not overshadow the convenience.

Why do I have 2 grey water tanks? Most likely, the manufacturers of modern RVs feel that their customers need extra gray tanks in their rigs. It is an added convenience and one should not look a gift horse in the mouth. The extra tank allows you to boondock longer without worry.

To learn more about having 2 gray water tanks instead of just one in your RV just continue to read our article. It has the information you need to know about in order to use those tanks to their fullest potential and purpose.

Why do I Have 2 Grey Water Tanks? 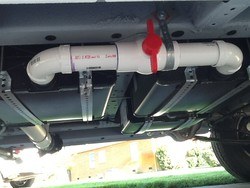 The best answer we can give is that the manufacturer is trying to make sure your RV experience with their model of RV will be at its best. You can store more gray water until you reach the closest dump station. That extra storage comes in handy as you do not need to detour from your planned route to do that objective.

How these tanks empty is another issue that has been left up to the different design engineers of each company. You will find that some tanks only have 1 gray handle to manipulate while another model may have their gray handles in the regular position and another under the slide-out.

In one situation, they show 3 gray tanks when there are only 2. To find the actual answer to how many gray tanks you really do have, you may have to do a physical inspection underneath your RV. 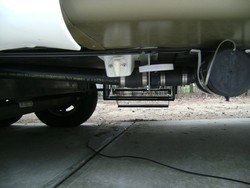 If you liked to play hide and seek when you were a kid, that experience should help you find the second valve for your extra water tank. The reason we say that is because RV manufacturers like to hide little details like this and then never tell you where those items are.

In fact, some owner’s manuals are too generalized and don't contain all the information you need in order to handle the minor problems you can fix yourself. Some owners do not find out till later when a sink, etc., is backing up with gray water that they have a second valve to open to drain the extra tank.

The locations of the extra valve will not be in the same spot with each model of RV. Some have found it under the slide-out and they can’t drain until the slide-out is retracted.

Others have had to trace the water lines and when they come to the other valve they do not recognize it as a handle may be missing, it looks like a little box, and so on. Then the location of the tanks and their valves depend on the floor plan.

If the toilet is between the shower and the kitchen sink, then it will also have a valve between the two. Where your valves are located will depend on your floor plan. The volume of water doesn't play role in determining where your sinks and showers exit.

That means one tank will fill up faster than the other and needing frequent dumps while the other one you may skip emptying for a while. Which is a good thing if the valve to empty is in a weird and difficult to access location.

How do You Connect Two Grey Tanks? 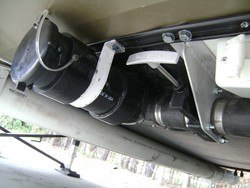 To do this will take looking at the current drain system, how it was plumbed, and if one tank is ahead of the axle and one behind, or if both are on the same side of the axle. In some cases, RV owners have a valve already installed that allows you to combine the two tanks.

All you have to do is open that valve to connect the two tanks and double your capacity. Then close it when you need to have the two tanks working independently of each other.

If your rig does not have that luxury, then you would have to install another valve somewhere along the drain system to connect both tanks and use them as one. This valve or one similar to it, found at Amazon, is the type of valve you are looking to install.

As we said the location of the tanks will play a role in if you can plumb them together or not. If the tanks are on the same side of the axle, then you should not have a difficult time connecting them.

However, if one is on one side and the 2nd tank is on the other side of the axle, then connecting the two tanks will be more difficult due to the axle being in the way. There are many different methods you can use to connect the two tanks, along with many different parts, like Y joints, etc., that will help you accomplish this goal.

How do You Equalize Gray Tanks? 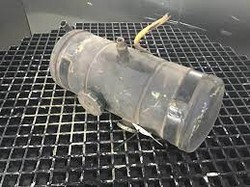 This will depend a lot on the location of your tanks. As we said there will be plumbing issues due to where the two gray tanks are placed and how far apart they are. Before you do this make sure the two tanks are not already connected and equalized already.

Some manufacturers know about this issue and have taken steps to get it done for you. You just have to look to make sure. Then some will have a valve between the two tanks that you just twist to open and equalize the tanks and then twist to close when you need to separate tanks.

There is a 1-inch twist valve you can install upstream from the dump valves that may solve this problem. it is not hard to install and once done you have a 1/4 inch turn to open or close both tanks. When you open the valve the two tanks should equalize.

The only thing you have to worry about would be the cold weather. If it gets too cold and the connection is exposed, then it could freeze on you. You would have to insulate the connection and any exposed pipes to make sure the valve works as claimed.

1. Can you drain the gray water tanks directly onto the ground?

2. How accurate are the tank monitors?

This is a good question as the monitors may not always be made from top-quality materials. These monitors should be cleaned regularly in order to keep any dirt, etc., from interfering with their work.

3. When should I dump my gray tanks?

This instruction will work for your black water tanks as well. Wait till your tanks are either full or nearly full. That way you have enough pressure forcing the water out of the tanks and it should go quicker as well.

4. How should I maintain my gray water tank?

There will be times when the gray water tank will start to create some foul odors. Those odors are due to the grease, bacteria, and other items that go into the tank. using holding tank chemicals that are designed to cut the odors and break down the grease will help your tank last longer and work better.

Regular dishwashing liquid that fights grease will help cut the grease and break it down.

5. How do I Winterize My Gray Water Tank?

Do not use car windshield washer fluid or car antifreeze. Both those automotive solutions have chemicals inside of them that break down seals used in RVs. It is best to use the antifreeze solutions that are made for RV storage tanks.

Having more than one gray water tank is a blessing. You get to boondock longer, take longer showers and dump less often. As long as you can equalize the tanks to get maximum capacity.

Just watch out for the control panels as they may indicate there is an extra tank when there isn’t one.