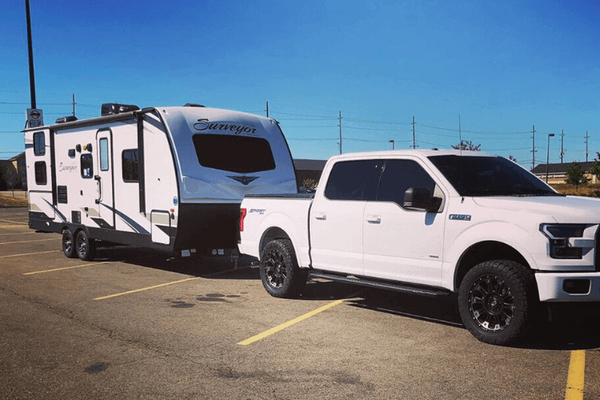 2.7 Towing: What Size Travel Trailer Can a 2.7 EcoBoost Tow?

Some people like the 2.7 eco boost while others think that if you are going to be towing heavy weights on a regular basis, you need to upgrade to the 3.5 with the towing package. However, the 2.7 seems to hold its own even when the trailer weighs 9,000 pounds

Some people have said that there is no problem for this engine to tow a 30-foot trailer. Others have upped the length to 38 feet but to be comfortable on the road, you want to stick to the 7,000 to 9,000-pound range and those trailers come in different lengths.

To learn more about this engine and its towing capacity, just continue to read our article. It has the information you want to know about. Not every trailer needs a large pick-up truck towing it and you can save by going smaller. 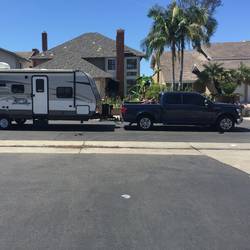 This V6 engine seems to have a lot of power to it. The motor can haul up to 2,470 pounds in the bed and still have power left over for a 9,000-pound trailer. But you should not push the towing and hauling capacity to its limits if you want the engine to last a long time.

This is not the largest engine in the Ford line up but it is also not the smallest nor does it tow the lightest weight. The key problem some owners had was stability. They tried everything and nothing seemed to work.

We are not sure if Ford has addressed this issue on subsequent Ecoboost models or not. The F150 is only a half-ton truck and that design does not lend itself to towing a lot of weight, especially when getting near payload capacity.

You should do a test drive to see for yourself and make sure this is the type of engine you want under the hood.

Can You Pull a Camper With a 2.7 EcoBoost?

This will depend on the length and weight of the camper. That is if you are using that term to describe a trailer. This engine has been known to tow 30 to 38-foot models with some degree of success.

But those trailers were under the weight capacity for towing. That is going to make all the difference. If you are talking about a regular truck camper, there should not be any problem as long as the truck camper does not exceed the 2470 payload limit.

It is all about weight and the limits. If you exceed the limits and try to pull too much weight, the engine will overwork and possibly get damaged in some way. You may be lucky and not have it happen to you but others may not be so lucky.

Check your owner’s manual to find out the specific weight limits on your Ecoboost truck and see what weight you can tow or haul.

How Big Of a Camper Can an F150 EcoBoost Pull? 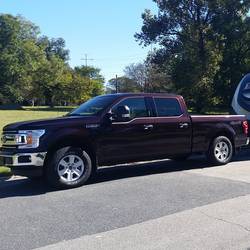 It is not going to be the length that really matters in this situation. It will all depend on the weight of the trailer. With a towing capacity of up to 9,000 pounds, you can haul some fairly long trailers and not have a problem.

If you add on an optional towing package there should not be any trouble towing up to 11,100 pounds. But again, that may not be standard for very V6 Ecoboost motor or truck. You still have to worry about payload capacity and tow packages do not change that limit.

There is also a heavy-duty tow package that you may be able to still get and that boosts your towing capacity to 13,000 pounds approx. The question is are these towing packages compatible with the F150 with the 2.7L V6 Ecoboost motor?

You would have to check with your local dealer to see if they are and if they are worth attaching to your vehicle.

This vehicle and engine can tow just about any model of travel trailer no matter who makes it. That is as long as that model of trailer meets the weight requirements. It is possible to go too long though as one owner talked about the instability of the package once the trailer got to 30 feet in length.

Sometimes it is best to go shorter and lighter to make sure you are not putting yourself or your family at risk. The F150 is a light truck and it is not going to handle crosswinds as well as heavier and larger pick-up trucks will.

You do have to take that crosswind into account as you will encounter it through nature and with all the big trucks traveling the highways. A lot of stabilizing products do not seem to work on this light of a truck so you may have to fix this issue through trial and error. 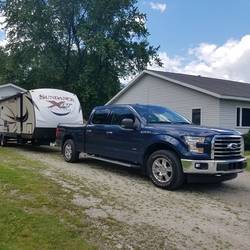 According to many of the owners we read during our research, this is a good motor and it is good for light weights. They almost all suggested that you should move up to the 3.5 L if you wanted to have a better towing experience.

The power is there but there are just other issues that have many prospective owners move up a notch and get the bigger engine without moving up in truck class. The F150 comes with 5 motor options and you can compare them all to see which would be the best option for your RV needs.

Don’t forget to compare HP, torque, and mpg before you make your decision. For smaller trailers around the 5000 to 7000-pound range, this would be an ideal motor to have under the hood. You may even experience better fuel efficiency as you are not using a larger engine or towing a very heavy load.

Also, you do not want to max out the payload capacity as that will influence how much weight you will be able to tow to your destination.

Yes, it can, and in fact, some owners have stated that this motor is perfect for hauling lighter boats and getting them to the water and back out again. If the boat and trailer do not exceed maximum towing capacities then there should be no problem hauling the boat to where you want to go.

The power is there and you should have enough to get in and out of sandy or wet areas without too much trouble. Depending on your driving skills, of course. The size of the boat will come into play as well as shorter or lower designs would be better to tow than the taller boats many people like to own.

All weight limits will apply when you attach your boat to the hitch and make sure to watch the hitch weight. You do not want to exceed that either. The ideal hitch weight is said to be between 10 and 15% of the overall weight of the boat and trailer.

Play this by ear and play it safe as you do not want to damage the truck or the boat. 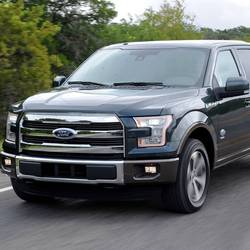 The 3.5L goes well beyond those figures as it is rated at 13, 200 pounds for towing, and 3,230 for payload weight. The EcoBoost 2.7 is capable of reaching 13,200 pounds if it is compatible with some of the better towing packages FRD produces.

But those towing packages are going to add significantly to your overall purchase price. There are different towing packages available and each one’s towing limit depends on the features included in the package.

To tow safely, either model of the engine can handle 6,000 pounds with no problems. You may even be able to tow 7,000 pounds safely but that is getting close to the limit. You would need the tow packages to make sure you can safely tow heavier weights.

The 5.0 L that is found on a couple of different F150 trims does not tow as much as the 3.5L can. its maximum weight limit is 11,600 pounds, which may be increased with the right tow package added to it. Its payload capacity is just 40- pounds heavier than the 3.5L at 3,270 pounds.

These numbers are still better than the 2.7L numbers but not by that much. With tow packages, you may be able to increase the 2.7 to a point where it can haul or tow the same amount of weights.

How you load your trailer will play a role in the stability of the truck. There is not much talk about the 5.0’s stability issues but some owners did not like how the 2.7 handled when towing larger trailers.

Of course, how you pack will play a very large role in this issue. You will want to spread the weight around so that the trailer is more stable and does not have too much weight on the front or the back of the unit. 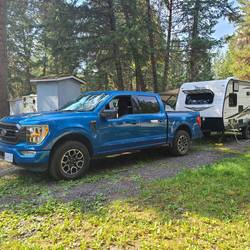 There are a few different ratings for this topic. You may be able to get up to 18 mpg when you are traveling empty and not towing anything behind you. Some owners have said they have towed other vehicles and got 15+.

Others have stated that towing a fully loaded trailer, they were able to achieve only 8 to 9 mpg. Besides driving habits, one of the factors in fuel mileage will be the profile of the trailer. The higher the profile the bigger the drag.

The more drag you have the lower your fuel mileage. So if you get a low profile trailer, your gas mileage should be better than the owner with a high profile trailer. Also, the weight of the trailer will play a role in how great your fuel economy will be.

Tow heavier trailers and do not expect to get the same mpg as you would with a lighter model. The key to better gas mileage would be to keep the truck under 65 mph with or without a load.

This seems to be a common problem and the members on one Ford discussion forum have created a long thread on this issue. They were talking about how the dealers were saying there was nothing that could be done as no codes were generated.

This is not an isolated situation as many owners faced this problem with towing. The only one that we read said they had it at 38,000 miles and when they did not tow. This was back in 2019 and it is not sure if FORD has fixed the problem or not. As of 2020 they had not.

According to later posts, the auto start/stop button may be the reason for some of the trucks to stall out. Turning that off may solve the problem for many drivers. Another solution may be that the PCM needs to be reprogrammed.

It is hard to say what the solution is as no one is really aware of what causes this problem but it is a common thing that takes place.

It is all about the weight. If your truck is not rated to tow very much weight, you either get a tow package and upgrade it, or you only tow light trailers. The 2.7 L seems to be a good motor with lots of power but it may not be great in the stability department.

Finding a Double Decker Trailer For Boat and Car (Guide)

Broken Down Motorhome: How Much Does It Cost To Tow an RV?