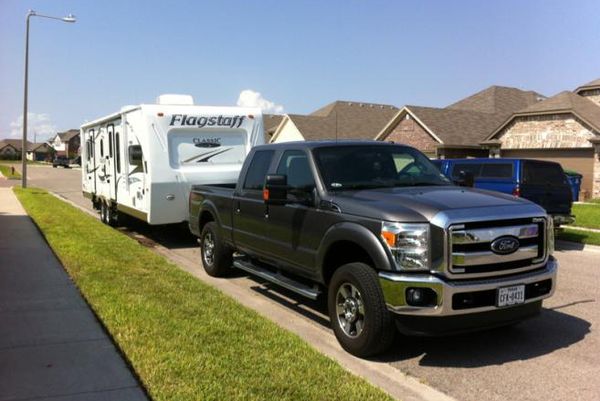 Towing With a Ford 6.2 Gas Engine (What You Need to Know)

Newbies to RV life worry too much about engine size, HP, or torque when it comes to towing. But factory specs are fine with towing capacities. Just make sure the engine you have fits your vehicle and delivers the power you need to get over those hills.

One 6.2 gas engine came with 385 HP and 405 ft. lb of torque and it handles a 10,000-pound trailer with ease. It only got between 7-8 mpg when towing and took the hills like a champ. Your results may differ depending on your driving habits and the weight of your trailer.

To learn more about towing with a 6.2 gas engine, just continue to read our article. It has the information you want to know about in case you are thinking of upgrading to this level of power.

Towing With a Ford 6.2 Gas Engine

The 6.2 is the standard engine on the Ford 250 truck and brings with it a 15,000-pound towing capacity. Coupled with its 385 HP and 430 lb.-ft. of torque, you should have enough power to handle most trailers including 5th wheels.

According to the reports, this engine is a beast and can handle hills without dropping down to lower gears. One owner said his engine only reached 3rd gear out of 6 when he made the attempt. So far we have not seen any negative reports about this engine.

It seems to hold up nice and fine under tough conditions and the owners we read were well pleased with the performance. The power in this engine comes alive between 4000 to 6000 RPM and will drop to 3rd at 5000 RPM.

The biggest drawback is the lower gas mileage when towing. No one has reported getting over 8. But when empty, they get 12 to 14 mpg

For those RVers who like towing trailers, the news is nothing but good here. Some 2022 F250s are getting between 13,000 and 15,000-pound capacities coupled with an approx. 4000-pound payload capacity.

Those figures include when you tow with a gooseneck or 5th wheel trailer. The power in this engine is there. We have seen higher figures but have not been able to confirm if those figures are realistic or not.

Some reports have also come in lower than those figures so it would be best to talk to a dealer and see what they say. The actual figure may be a bit lower than the stated weight rating so do some good research on the specific vehicle you want to buy.

What kind of Fuel Mileage Does a Ford 6.2 L Get? 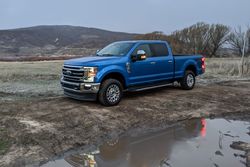 The news is not all good depending on your point of view. Some owners have reported getting 7 to 8 mpg when towing a heavy trailer. Then when they unhooked, their mileage came close to doubling even when they drove in the city.

So far, the highest mpg we saw when empty has been 14 mpg. If you are used to getting lower mileage, then this may be good news as you will save a little money. The diesel prices seem to be on average higher than the gas prices so this may save you some on that end as well.

Mileage will depend on your driving habits. the road and weather conditions and how many hills you have to climb before you reach your destination. It will also depend a lot on how heavy your trailer is and how much gear you pack along for the trip.

The lowest rating we have seen so far is 4.5 mpg but the owner was pulling 15,500 pounds behind him which may account for the low gas mileage. Others have reported a better rating making about 7 to 8 mpg on average on their trips.

When they unhook, their ratings go up to double figures and they are all pleased with their results. The 6.2 is a powerful engine and it will use a lot of fuel if you are not careful. Your driving habits will play a role in your results and performance as will the speed at which you travel.

Keep in mind that GM makes a 6.2l engine as well. When you do any research be careful not to confuse the two models. Their rating may be different than the Ford models.

From all the owner’s experiences that we came across in our research, this engine tows very well. All the owners that talked about their performance were happy with their results and even glad to get the gas mileage that they got.

The only thing that seemed to surprise them was when the engine downshifted from 6th to 3rd when going uphill. This downshift comes without notice. Also, you may hear a whoosh sound as you are driving.

That sound is the fan coming on. It is a powerful fan and pulls a lot of air. Plus, it makes a lot of noise when it is operating. The fan speed is supposed to be controlled by the onboard computer and it rarely uses the top speed available when it turns on.

There have been reports of some jerking when shifting gears but that has been put down to a small transmission fluid leak that may not happen on all vehicles. The transmission has been around for several years and Ford may have gotten all the bugs out by now.

Also, this transmission is supposed to provide higher red lines for gas engines than what you get on a diesel engine. Another problem you may encounter is the delay between shifting from forward to reverse and back again.

That issue is due to a problem with the pressure control solenoid which acquires a build-up of metallic debris over time. Other than that, there have been no real negative reports that say the transmission is worthless.

It seems to be a very good transmission and is specially made for the 6.2 gas V8 and the 6.7 Power Stroke motors.

It seems that Ford does not make a 5.3 L engine but GM does. GM also makes a 6.2-liter motor and if you compare that engine with the 5.3, the 6.2 is better. The 5.3 is great with light loads under 8000 pounds and does not seem to have the power to go much higher than that.

When you compare those results with the Ford 6.2 motor, there is no contest. The Ford option outperforms and out tows the 5.3 hands down. There is no comparison as the Ford is just too powerful for the GM 5.3 to match.

The newer GM 5.3 with its 10-speed transmission may give the Ford a run for its money but overall, it is hard to compete with the HP the Ford 6.2 puts out. The 5.3 also has a lower payload capacity making it better for light loads.

The latter motor produces more power than the former one. The 7.3 hits about 430 HP with 475 lb.-ft. of torque and is said to be the most powerful gas motor in the Super Duty lineup.

It is also said that while the two engines are similar, the 7.3 packs more punch than the 6.2. Gas mileage is about the same between the two motors.

Ford does not make a 6.6L but GM does. The two motors seem to have similar specs with both reaching over 400 RPM and almost 500 lb.-ft. torque depending on the model of truck you buy.

The two engines are very powerful, can handle a lot of weight when towing but the edge may go to the GM motor because of the extra power it has. Because the 6.6 has only been in production for a couple of years, it may be too soon to make any good comparisons between the motors.

They are workhorse engines that deliver the power when you are towing heavy weights.

By itself, the 6.2L Ford motor seems to be a very efficient and powerful motor. It is well built and has the specs to make sure you do not have trouble getting where you are going.

In the end, it will depend on which brand you prefer. Both Ford and GM have their ardent supporters and both companies make great motors. Your results will depend more on you than the motor's size and power.

Do You Grease a Trailer Hitch Ball? (What Kind of Grease)

Equalizer vs ProPride vs Hensley (Differences and Problems)