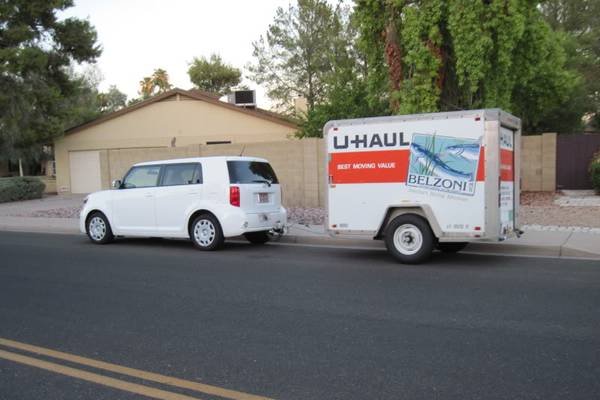 The original versions of the Scion xB may not have a great towing reputation. But as the years went on, Toyota made improvements so that this car could tow at least 1000 pounds and carry extra gear and passengers at the same time.

Can an xB tow a trailer? You have to check the engine size before deciding to tow anything. When the xB had a 1.5-liter engine its towing reputation was not great. The upgraded 2.4-liter engine could tow at least a 5 by 8 trailer loaded with different items.

To learn more about the towing capacity of the different Scion xB models, just continue to read our article. It has the information you want to know about. The towing capacity may not be that great but at least it is good for small towing jobs.

**While the authoritative websites on cars did not list any towing capacity or payload information, except 1, it is safe to conclude that you may be able to tow up to 2000 pounds with this vehicle. Check your owner’s manual to see exact specifications

Can You Put a Tow Hitch On a Scion xB? 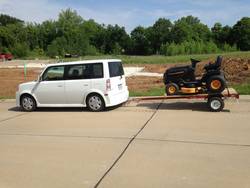 Yes, it seems that you can. We have seen many websites advertising these products specifically for this model and all those years. There is a hitch made for the 2004 to 2007 model years that will allow you to tow up to 2000 pounds.

This particular product may set you back about $200. There is a cheaper hitch for the 2010 model year. It too will give you a 2000 pound allowance with a 200-pound tongue weight.

For the 2015 model year, there is a hitch that will give you up to 3500-pound towing capacity with a 350-pound tongue weight. The different retailers are Auto zone, e-trailer and more so you should have a fine selection.

We went to reputable car sites and they did not list the towing capacity so double check first before buying any hitch.

How Much Can a Scion xB Tow? 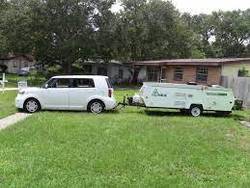 This is the key question. On unofficial sites, the different owners were saying you can easily tow over 1000 pounds. And if the Kelly blue book figure is correct, see chart, you should have no problem towing up to 1500 pounds with the 2006 model year.

Official websites like Car & Driver, Edmunds, and so on, are not listing any towing capacity for this car. They did not give any reason why they omitted this information. With the presence of the 2000 and 3500 pound hitches those figures should give you an idea of how much you should be able to tow.

Also, none of those reputable websites listed the payload capacity. They just listed the amount of storage space at 43 ci approx. We suggest you contact Toyota or check your owner’s manual to see what they say on this issue. The owners have towed 5 x 8 foot fully loaded trailers without hassle.

Yet, they say to stay within a few pounds of the 1000 pound mark.

Can a Scion xB Tow a Trailer?

Yes and no. if the trailer is a smaller cargo version, then the answer is positive. But that is going on the word of at least one owner. However, we have learned that the manual states that the car is not designed to tow a trailer. also, towing a trailer is not recommended.

Toyota may be saying that for legal purposes and if you do tow a trailer, you do so at your own risk and cannot sue Toyota if something goes wrong. But with the availability of hitches designed for the scion xB vehicle, you may get away with towing smaller cargo-type trailers.

You certainly would not be able to pull anything larger than a 13-foot travel trailer if the weight was very low. Small boat trailers with small boats should be okay but again, it is not officially sanctioned

As you can see from the chart, the total weight is 0 pounds. Then as you read earlier, the owner’s manual for this car states this vehicle isn't designed for towing, and towing is not recommended.

Yet, people have attached a hitch and have reported some success in towing trailers and heavyweights. The amount of weight they towed does not seem to be much greater than 1000 pounds but you are taking a risk if you do it.

You cannot always believe what the owner’s manual or the carmaker says about towing. They have to be careful so that they do not get sued if anything happens. You may have success towing with the Scion xB no matter the year but be careful.

In spite of the 3500-pound hitch for the 2015 model, that amount of weight may be pushing your luck and the towing capacity limit.

Pull Adapter: Can You Pull a Fifth Wheel With a Bumper Hitch?