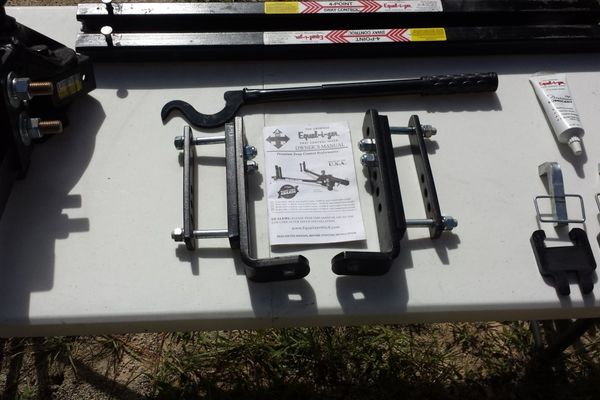 Equalizer E2 vs E4: What Is The Difference Between E2 And E4?

It is all about sway. One of the tougher aspects of towing a trailer is controlling trailer sway. It is an ongoing battle as different companies try to perfect the perfect sway control weight distribution hitch. If you get the sway under control, then you will have a better time towing your trailer.

The biggest difference between the two hitches is that the E2 offers less sway control than the E4. The E4 has a 4-point system that makes it a better hitch. Plus, it can handle heavier weights than the E2 can. Tongue weight will always be a factor here.

To learn more about these two hitches, just continue to read our article. It explores the issue so you know which hitch will be best for your towing needs. The E4 is the upgrade over the E2 and may be the best option you can buy.

What is The Difference Between E2 And E4 Hitch? 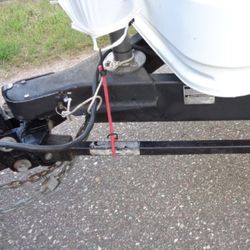 Price is always going to be the biggest difference. The E4 is priced at around $825 while the E2 is about $200 cheaper. But that will depend on where you buy your hitch. Some stores have huge buying power so they can offer lower prices to their customers.

Then the E4 has a 4-point anti-sway design. That is the next biggest difference as the E2 only has 2-point sway control. It will all depend on how much sway control you want. This design gives you minimum sway control when you opt for the E2.

Also, the E4 will prevent sway from taking place, the E2 only reduces the amount of sway you will experience. Plus, the E4 has a friction set up that makes sway almost hard to do. There is no friction on the E2 system.

Finally, the E2 is made by Fastway while the E4 is made by progressive manufacturing. Some people have said that both hitches are made by the same company. But we did not find an E2 listed on the Equalizer website. Progressive is the company behind the Equalizer hitch (E4) 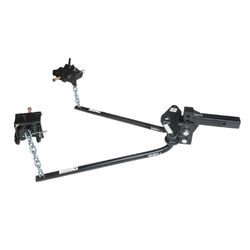 Some people may be confused when they see the terms E2 vs. E4 and that these hitches have 2 different brand names. It turns out that Fastway is a subsidiary of Progressive manufacturing and that company sells the E2.

Equalizer or Progressive sells the E4 weight distribution hitch. That is why you will only find one hitch listed on the Equalizer website. There is not that much difference between the 2 hitches. Most Rv owners that we read own the E4 as they think it is the better hitch and it probably is.

But in a head-to-head comparison, the only real difference between the two will be the 4 to 2-point sway system and the price. Other than that they are both trailer brake compatible, they come built to handle different weights, and both fit a 2-inch hitch ball.

The other difference is that the E4 is said to stop sway from taking place. The E2 does not do as good of a job and simply reduces sway. All the praise from the owners goes the E4 way even though dealers will say the E2 is better for your towing set up.

As one owner said, spend the extra money and go with the best and that would be the E4. 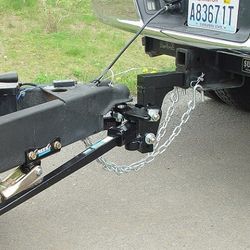 Out of 900 reviews on Amazon, 82% of the people who bought this hitch gave it 5 stars. Only 7% gave it a one-star rating. The comments that followed those ratings were overwhelmingly made by satisfied customers.

They felt it was the best hitch made and that it was very well built. That is the same type of remarks we are getting from the different RV discussion forum members. They prefer the 4-point system over the 2-point option as they can drive better and have less worry.

There are a couple of drawbacks though that some reviewers mentioned. One is that they did not like the high torque that had to be applied to a few of the bolts. The specs called for a 320-pound torque which is quite a lot when you compare it with other bolts.

The second drawback is that you have to assemble the hitch yourself. This may not be an easy task but it is hard to find one for sale that is preassembled. This is a drawback because it is a heavy hitch and you need help putting all the parts together.

One owner hurt his back trying to assemble this hitch so you do need to be careful. Other than that it seems to be a great hitch that does the job as advertised. 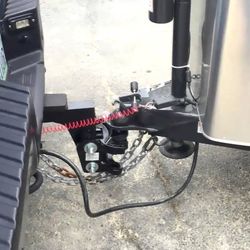 As we reported earlier, Fastway company belongs to Progressive Manufacturing which is behind the Eq﻿﻿ualize﻿﻿r E4 hitch. That means that progressive actually makes both hitches but markets them under different company names.

Everything we said about the E2 earlier applies here. The Fastway works with multiple trailers and hitch weights, just like the E4 and it has the same compatibility as the E4 for surge and trailer brakes.

The Fastway E2 starts at $605 approx., for the 4.5 K trunnion without the ball and the 10K is listed at $625 approx for the same set up. Do your comparison shopping to get the hitch you want at the price you can afford.

Those prices were listed at Amazon with the E4 currently unavailable at this time.

Are Fastway And Equalizer The Same? 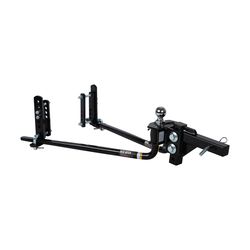 Technically, the answer should be no but it is more of a yes and no answer to this question. Fastway is said to be owned by Progressive manufacturing which also owns the Equalizer E4 hitch.

While they may be made by the same parent company, and use similar construction materials and designs, there are slight differences between these two hitches.

If you look at the two hitches side by side, it will be hard to tell them apart. They have the same exterior design. The differences are hardly noticeable as they are placed in different locations on the hitch. In other words, they are hidden from view and not obvious.

The only real difference between these two is the 2 and 4-point sway system. The latter prevents sway and the former does not. It just reduces it. Other than that, you are looking at the same hitch.

Can The Weight Distribution Hitch Be Too Big? 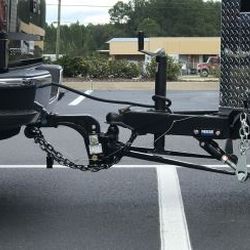 When you go too large you will have a very rigid ride and a very bouncy trailer. That is good news because you know nothing major will be damaged. According to progressive Manufacturing:

“We have customers with lighter loaded tongue weights towing with the 10,000/1,000 hitch - and they report no problems. We recommend that you have at least 300 lbs of tongue weight to use the 10,000/1,000 hitch, and preferably more, which you have. I don't think you'll notice anything other than great towing with the hitch as you currently have it.” (quoted from http://www.rvitch.com/forum/index.php?topic=83493.0 )

Remember your dry tongue weight is only measuring an empty trailer. When you add your supplies, etc., that tongue weight can go at least 200 to 300 pounds heavier.

Sometimes it is best to go big as that gives you more leeway when you decide to change trailers to a heavier model. Going smaller and then upgrading means you would have to buy another hitch to handle the heavier tongue weight.

There are a lot of weight distribution hitches on the market today. The E2 and E4 are two of the finest options you can buy. The E4 is the best seller because it performs so well.

But if you have a smaller trailer, then you can have a great performance from the E2. Pick the hitch that will fit your trailer the best, that way you are covered.

Bumper Pull To Gooseneck Conversion (How To Convert Guide)