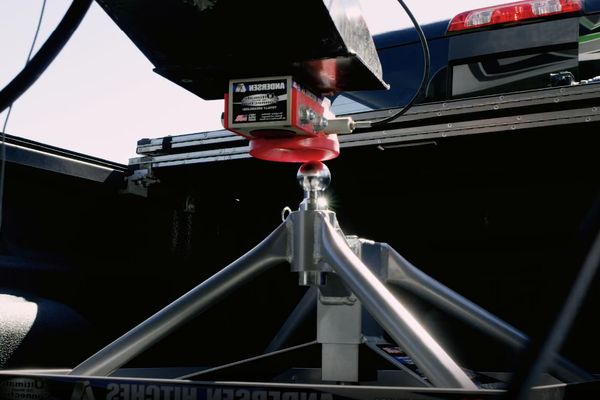 What might be called one safety issue is that the hitch may move during towing. Even when the proper torque and sequence has been applied. There are other complaints that may make the Anderson Ultimate Hitch a safety concern.

To learn more about Anderson Ultimate Hitch and the safety issues surrounding them, just continue to read our article. It lists some of the major issues that may make you think twice about using one for your towing needs. 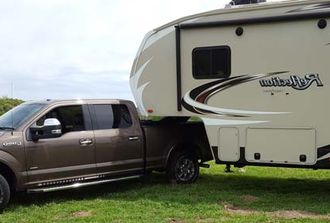 One of the more common issues that arises with the Anderson Ultimate Hitch (AUH) is that it is really not made for short bed pick up truck. The clearance is just not there and the pick up has received some expensive damage.

Another issue or complaint that could be called common is that their hitch does not come with a power mechanism to raise and lower the ball. This mechanism would make hitching and unhitching the trailer a lot easier .

A third issue would be the constant failure of the funnels. These seemed to be replaced more often than any other part on the AUH. There is a lot of talk about this issue and how to try to avoid it from taking place. 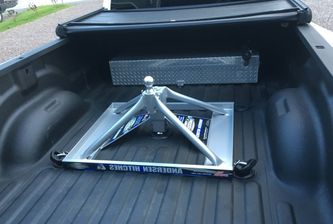 Nothing is perfect in this world and the AUH does seem to have its share of problems even many of the users like the hitch and the way it performs for them. There are other AUH users that have received a lot of truck bed damage due to the design of the itch.

Part of the problem with the bed damage is that the AUH works better with a lighter trailer. Also, the pin box design can and does contribute to the amount of damage the truck bed is receiving.

The damage may be cosmetic at first and easy to fix but if left for too long, you could be looking at some major repairs. Even with the Anderson adapter, you are not going to avoid this issue.

Most metal pieces that are joined together will eventually make some sort of noise. Metal on metal is not a noise reducing combination. When you hear squeaking coming from your AUH, then you need to check to see what pieces are rubbing together.

The squeaking noise may be due to the fact that the friction liner has worn out and the ball and hitch are rubbing directly against each other. Anderson’s hitch is advertised as no grease is needed but that claim does not solve the problem nor eliminate it from taking place.

Another source of the squeaking could be the chains that come out of the tubular guides on the frame brackets. Or the the screw pin shackles have started to malfunction. 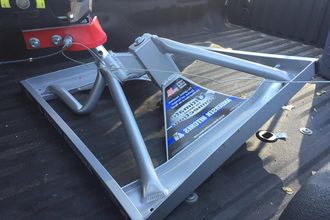 It seems that Anderson makes a very strong hitch. There are not that many reported experiences of one of their hitches being able to bend. There may have been one in the last couple of years.

This is 1 out of the approx. 19,000+ ultimate hitches on the road today. With that one incident the bend came at the tubular guides and not the hitch. The design was changed and there have been no more reported incidents.

The main issue with an AUH is how high one has to raise their trailer in order to hitch up or unhitch from the AUH. If there have been bend issues, the source of that problem may have come from different users towing heavier trailers than they should,

The weight of the trailer would contribute to any bend issue in any hitch made today. Anderson has also made two redesigns of the hitch over recent years so they are taking this issue very seriously.

Anderson and some people bring up the Magnusen-Moss Warranty Act and say that it can be used to defend against the voiding of the warranty. The trailer manufacturers would have to prove that the adaption was the actual cause of the damage before it could void the warranty.

Unfortunately, this Act may not be taken seriously by manufacturers and all they will do is tell that they will see you in court. This Act is supposed to be a source of protection for the consumer but it takes along time and a lot of money to have it enforced and to receive the proper satisfaction.

A lot of research has been done concerning how much damage a hitch can cause a trailer frame and so far no evidence to support the idea has surfaced. Of course, that does not mean it hasn’t happened, it just hasn’t been found yet.

How to Straighten Andersen Hitch 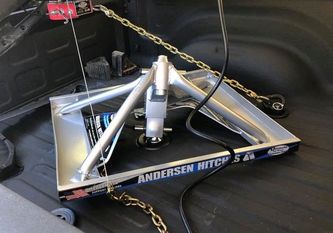 The way to straighten your Anderson hitch is to make sure you have the chains tight enough to activate the weight distribution mechanism. Or the sway control on the hitch may not be working that well and is fighting with your truck’s computer system.

To solve this issue, you would need to check the tension n the chains to make sure they are at their proper setting. Then if that doesn’t change the situation, you may want to be turn off your truck’s anti sway control mechanism.

The other solution would be to let the truck’s anti-sway mechanism handle the problem and simply take the hitch’s chains off.

In their practical sense, no, they do not need to use safety chains. Part of the reason for that is that the AUH is defined as a 5th wheel hitch and this classification doe snot require safety chains.

If the AUH is a goose neck design, then safety chains are required. The reasons for that is because of the latching system used on the goose neck hitch. With that said, the AUH does not use a latch nor is there any pivot at the ball so chains may not be required.

However, there are state laws to consider and if you are going to do a cross country run, then it would be wise to check with the state offices you intend to travel through and see what their regulations are.

Indiana, California and Texas all have laws that require safety chains to be installed and used on trailer hitches. Indian’s law limits that application to commercial vehicles but there have been some recorded exceptions.

The good news here is that the majority of American states do not require safety chains when using a trailer hitch or a 5th wheel. Even so, safety chains can be a good idea as it is always best to err on the side of caution.

If you can get by the looks, the Andersen is said to look like an engineer and a welder just threw something together to prove a point while the Pullrite looks like a very professional manufacturing piece of equipment, then you will see that both are very top quality hitches.

The PullRite has several mounting options that protect against bed deflection. It also does not depend on the truck’s bed for fore and aft support. The Andersen has a 'T' handle that has to be mounted on the bottom of the RV. This keeps it within easy reach for better and easier operation.

One drawback to the PullRite is that you have to be very straight in lining up your truck to hitch or unhitch correctly. That is if you are using the capture plate. The Andersen’s drawback may be that it is a little too light and can’t pull heavy trailers that well.

All in all if you go with either one, you should be using two of the top best trailer hitches on the market today. Your selection will boil down to how you prefer to handle the hook up, unhitching, and pulling of your trailer. Both have their pros which make them ideal for anyone.

In this case noise might be the defining quality between the two hitches. The Andersen is a lot quieter than the Equalizer which may help your travel time. Also, the Andersen has less bucking action after hitting a dip in the road.

The consensus is that both trailer hitches will meet your needs and their use will depend on your preferences. How much sway control you want, how much load equalization you are looking for, and so on.

The main issue against the Andersen here is the same as the one in the previous section. Andersen's are not designed to handle heavy trailers. The Equalizer is and that may make a difference in your purchase decision.

You need to ask yourself, how much weight does your trailer have when loaded. Then let the answer help you make your decision. Also, the price of both may make you go one way over the other.

When it comes to trailer hitches, there are only a few differences between them as they are all designed to handle the same job. Tongue weight, towing issues are the main problems to be concerned about and both the Andersen and Equalizer deal with those issues quite well.

The Blue Ox does perform well at its basic tasks. It has great sway control even in crosswinds. But then almost any trailer hitch will do the basics well. The traditional chain hitches with anti-sway bars do the basics quite well also.

Where the Andersen has an advantage over the Blue Ox is in the chain and tightening and release mechanism. The truck and trailer has to be remain connected with the Blue Ox in order to raise and lower it.

Then you have to watch the latch when releasing the Blue Ox hitch. It can swing very quickly and hit you if you do not have a good grip on your wrench.

Again, which trailer hitch you use will depend on your experiences and preferences. It will also depend a lot on your needs and how much weight you are wanting to pull.

During the research for this article, we came across more positives than negatives supporting the Andersen ultimate hitch. The vast majority of users liked it and found it to be a hitch they could count on. They also liked its ease of use.

Trying to find common issues, complaints and other negatives as very difficult. The one issue that stood out and that we mentioned several times already, is that the AUH is not really made for heavy trailers. You may want to rethink using it if your RV 5th wheel is extremely heavy.

The other issues found may have been more owner specific and were to that common. One example was the fact that the Andersen may not work that great with short bed trucks if you are trying to make a 90 degree turn. Some pick up truck damage is to be expected.

Other than that, most people enjoyed using their AUH and have had little trouble with them.

Equalizer E2 vs E4: What Is The Difference Between E2 And E4?

Bumper Pull To Gooseneck Conversion (How To Convert Guide)