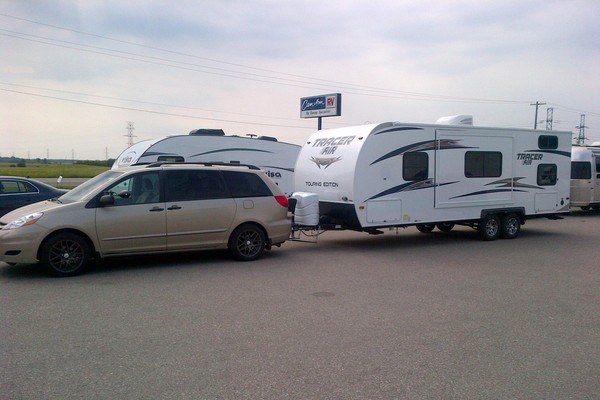 No matter which vehicle they own, the owners generally find themselves in a situation where towing is the only option. Towing can be a lot of fun if you have the right vehicle. Sometimes minivans are not the best at towing, but they give it their best shot.

Toyota seems to be stuck on one number when it comes to their minivans towing anything. Both the 2014 and 2015 models of the Sienna can tow up to 3500 pounds. That is if they have the towing package installed. You may not get the hitch, though, and that will cost extra.

To learn more about the towing capacity of these cars, just continue to read our article. It has the information you are looking for in order to tow with your Toyota Sienna properly. Just do not go beyond the overall capacities for weight in any category.

As you can see, when it comes to towing, either year’s models are precisely the same. They should also have the tow package, except for the hitch, pre-installed for you as a standard option.

It is hard to say as these car companies make changes every year concerning what is standard and what is optional. Before you buy one of these models, make sure the tow package is already installed. That way, you will avoid more expenses when you decide you do want to tow something.

How Much Weight Can a 2015 Toyota Sienna Tow?

As you can see, it is not a lot of weight, but it is still enough for you to be able to pull a nice smaller trailer, your speed boat, and your horse. You would be amazed at what you can tow as 3500 pounds gives you lots of towing options.

The key is to make sure you do not put too much weight on the trailer as you still have to factor in passenger weight as well as any gear and supplies you need to carry with you. If you are unsure, go lighter, not heavier.

As much as you want to hear a different figure, this model will only tow up to 3500 pounds. This is verified through many authoritative car websites. No matter which model of Sienna you buy, this will be the maximum weight you can tow.

Why does every model get the same tow rating? Probably because every model sits on the same chassis and frame. This model comes with the V6 engine, so there is enough power to handle what you want to tow. Keep in mind that the car can hold 7 passengers, so their weight will cut down on trailer weight. 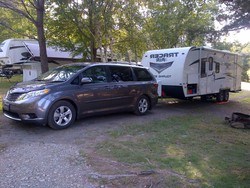 Even with the 266 HP V6 3.5 L motor, this model of Sienna will still only tow 3500 pounds. There is no leeway, and Toyota prefers to keep the numbers similar within its different models. Or so it seems.

The engine puts out 245-foot pounds of torque at 4700 rpm, so you know you will get over those hills even with a 3000-pound trailer attached. We checked other trims as well, and they all say the same thing- 3500-pound towing capacity.

If you want to tow a heavier trailer, the Sienna, no matter the model or trim, will not be the tow vehicle.

One of the things you should find when looking to buy a 2015 Toyota Sienna is the tow package. It was a standard-issue and all Sienna cars made for this year had it factory installed.

The oil and transmission cooler were added to the engine for this car to tow that heavy weight. If someone says the tow package is not included or not on their model, then double-check because Toyota did not make exceptions to the rule that year.

Also, the Sienna has the Highlander power train, which is rated for 5000 pounds. 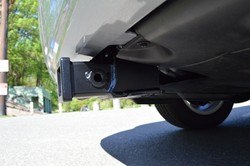 The price is right, as you can purchase a nice solid trailer hitch for under $200. Installation is supposed to be easy, and if you are handy with tools, it should not be too much of a problem.

The only drawback may be the cover, as it does not align that well with the hitch. You may have to either crush or remove the cover to get the hitch close enough to bolt it into place.

If you are not handy with tools, it may be best to take it to your local mechanic and have them put it on for you. They are equipped to deal with any frustrating issue.

This is not going to be a problem. The key to towing is the same with the Sienna as it is with any other vehicle. You need to make sure the passenger, gear, supplies, trailer, and boat weight remain under the towing capacity.

Add up all the different weight totals to make sure you are fine. Some people have been known to go 100 pounds over weight, but this is not a recommended option. You should be able to tow any recreational vehicle as long as the trailer and the toy remain under 3500 pounds. 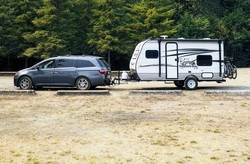 It is a 3.5l V 266 hp with 245-foot pounds of torque. There may be slight engine differences between the different trims, but those differences do not change the towing capacity. We checked several models and the specs are all the same. Just make sure the towing package is on the car before you start towing anything.

All the 2014 Sie﻿﻿nn﻿﻿a trim models we checked came with the same 3.5L V6 266hp engine. That means they all are rated to tow up to 3500 pounds. You are not going to get a different answer from Toyota.

Your problem may be attaching the hitch as the car’s design is not always conducive to adding parts at the car's rear. This is a job best left to someone who knows what they are doing as you do not want to cause any unnecessary damage to your vehicle.

This car holds 8 passengers, so make sure you calculate all the weights involved, including the driver’s. 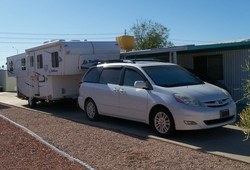 Yes, a Sienna can tow a camper, but you have to be careful about how much weight that camper brings with it. Even if the camper is at 3400, you may have trouble as you have to figure in your weight, any passenger’s weight, as well as all your supplies, toys, and gear.

Towing is not always cut and dry. The towing capacity is not just for trailers. The good news is that you can tow anything you want as long as all the weight remains under that 3500-pound barrier. You will need to do some simple math to stay within your limits.

The towing package is included on all 2014 Siennas. At least that is the last official word. But that package only covers certain engine parts. It does not cover the receiver hitch, the trailer brake controller, or the wiring.

Those you will have to add yourself. Some owners recommend using synthetic oil instead of regular oil even though an oil cooler and transmission cooler are already on your car.

What causes some confusion is that some of the paperwork may not list the towing prep package as installed. But according to Toyota, all 2014 models have it as a standard feature.

When you are prepared and have the right equipment on your vehicle, towing can be easy and fun. The key is to make alterations to your driving. You cannot maneuver as easily with a trailer in tow as you can when you are just driving the car by itself.

Yet, when you get to where you are going owing will seem worth the hassle. Just make sure to remain under that magic 3500 number, and you should be able to tow anything you want, within reason, of course. All Siennas stop at 3500-pound towing capacity.