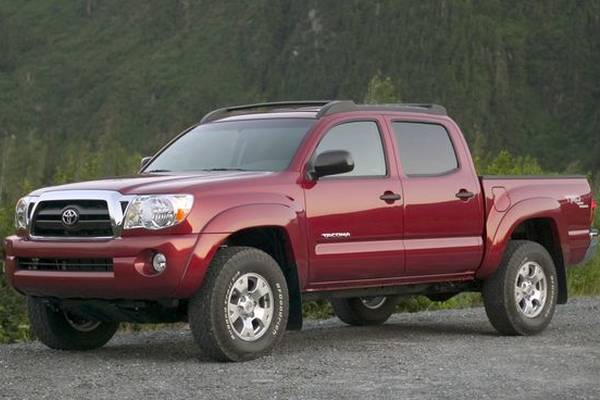 When you are looking at different trailers to buy, towing is up to the tow vehicle. If the trailer is too heavy for your vehicle, then you have to set your sights on something lighter or change your tow vehicle. The former is cheaper than the latter.

There were 6 engines placed inside the Tacoma between the years 2000 and 2020 and depending on the size of the engine, you could either tow 3500 pounds or 6500 pounds. That is if the trailer had a braking system installed. If it didn’t, then that capacity went down to 1000 pounds.

To learn more about the towing capacity of the different Toyota Tacoma models for the 2005 year, just continue to read our article. It has the information to help you find the right trailer for this vehicle. 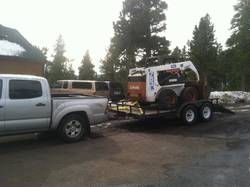 The 2.7L engine could tow up to 3500 pounds and that is the gross trailer weight including water, gear, and other supplies. The 4.0L engine, without the towing package, had the same capacity but with it, that total went up to 6500 pounds.

But as reported earlier, your trailer needed a braking system added to it or you lost all that capacity and went down to only 1000 pounds.

Is There a 2005 Tacoma Towing Package?

Yes, there was and probably still is a towing package available for the 2005 Toyota Tacoma. This package made a big difference in the size of the trailer you could tow. Without it, you would not be able to tow a very large or long trailer

Keep in mind that Toyota only made the tow package for the larger 4.0L engine which meant that the smaller 2.7L motor would not go above 3500 pounds. This would limit your trailer selection somewhat if you wanted to use this vehicle as your tow vehicle.

Also, if you are towing a trailer that weighs more than 2000 pounds, you would need a sway control to help you with the towing.

*some models would come in both engine sizes but the towing capacity goes with the size of the motor and would be the same figures as listed above for each motor size.

The model came with the 2.7L inline 4cyl engine. This size of motor reduced the towing capacity by 3000 pounds and the towing package was not made available for this size of the motor.

You could not raise this towing capacity unless there was a special after-market towing package made for this vehicle or the size of the motor. We have not run into anyone saying that there was.

What this does is help you set your sights on a smaller, lighter trailer which in the long run could save you money. It might be cramped a bit but at least you are not going to ruin your vacation.

The double cab had a bigger and better engine under its hood. This meant that you could tow 3500 pounds safely without adding the tow package into the mix. If your trailer was already light, then you could use the cost of buying a tow package for other important camping needs.

But, if you already owned or wanted to buy a heavier, longer trailer, you could buy the tow package and be able to tow up to 6500 pounds. Of course, these two figures assume that your trailer has a braking system installed on it. Without it, you would only be able to tow a small cargo trailer with little cargo inside.

As you can see by the chart above, the inline 4 cylinder engine did not come with a lot of power to spare. Its power output was just over half of the V6 which means that towing would be a delicate issue. You would really have to watch the weight you pack along.

The 3500-pound towing capacity is without the towing package. But as we said earlier, our research shows that the towing package was not made available for this small motor. You could not boost that total in any way no matter how hard you tried.

The 2.7L motor was the inline 4 cylinder engine found on many Tacoma trucks. The same information given in the previous section would apply here. There was just not enough power in that motor for the truck to tow anything larger than a Scamp or teardrop trailer.

But that small Scamp or teardrop trailer would still need a braking system installed or you wouldn’t have much leeway in your towing capacity. The power was there for the payload capacity and not so much for towing. But if small trailers fit your lifestyle, you can be economical and use this size of engine.

This is an interesting question as there were some differences in the towing capacities between the 2WD and the 4WD Tacomas. This weight capacity only ranged between 200 to 300 pounds and did not make a lot of difference except to allow you to carry more gear and supplies.

However, the towing capacities were tied to the 4 or 6 cylinder designs, not the engine models.

Someone mentioned on a Tacoma World forum that the tow﻿﻿in﻿﻿g capacity was 6000 pounds for this option. But that may be a bit on the conservative side as we did not see any 6 cylinder engine, with a tow package having a towing capacity of less than 6500 pounds.

There are different towing charts available that may say otherwise and that is okay. There are minute differences depending on the full model package. To reach that level, you will need good trailer brakes on the trailer. Don’t forget to add the brake controller as well. 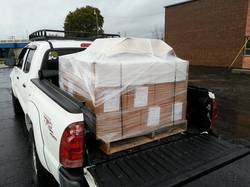 The payload capacity on the PreRunner was 1615 pounds but the 4door Access cab with a V6 and 4WD was only listed at 1400 pounds. Then the X-Runner had an even lower payload total, according to our sources. It is listed at 910 pounds at one source and over 1000 at another.

The Base trim model is just under 1500 pounds for its payload capacity, with the Double Cab listed at1540 pounds. For some models, it is said that any alterations to the vehicle may lower your payload capacity by 290 pounds. So check your owner’s manual to see if that applies to your specific Toyota Tacoma.

It is always best to check the manufacturer first to get an owner’s manual. This link will take you to the Toyota web page for the 2005 Tacoma owner’s manual. It is a PDF file for your convenience.

The next link takes you to a website that has just about every manual ever made. That link opens up to the 2005 option. Then there is this website. It covers the years 2005 to 2008. Finally, you can try this website as it has manuals from 2000 to 2021 for you.

The news may or may not be good for those owning a 2005 Tacoma. If the news is good or bad depends on the size of trailer you want to tow. If you need a lot more information on towing with your Tacoma truck, we leave you with this link.

It is called the Tacoma towing Bible and it is a very detailed thread with lots of great information on towing with your Toyota mid-size truck. Photos are included to help you with difficult aspects when it comes to towing.

Pull Adapter: Can You Pull a Fifth Wheel With a Bumper Hitch?