Finding an R-Dome for R-Pod 171 (Who Makes, Price, Reviews)
Kathy Ireland RV Furniture Reviews (Is It Good Quality?)
Can I Use Light Truck Tires On a Travel Trailer? (LT Tires)
Message Engine Power Reduced Duramax (Why And How To Fix) 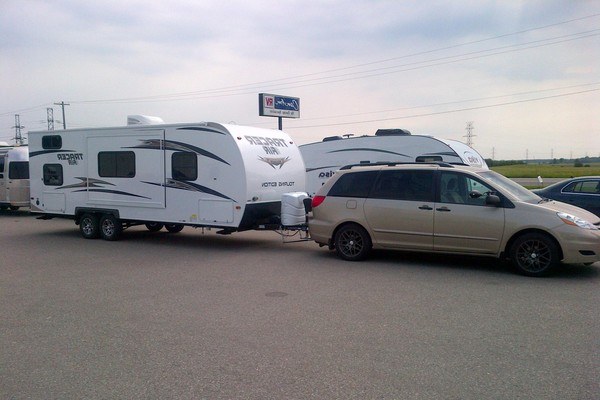 Getting where you are going sometimes depends on how much you can tow. Unfortunately, not every modern car is capable of towing large amounts of weight. You have to check the owner’s manual to see exactly all the different types of weight you can haul in one trip.

Whether you own a 2005 or 2006 Toyota Sienna, you will be happy to know that both car models tow the same exact amount of weight. Their capacity is 3500 pounds and not a pound more. Tongue weight is where you will have the most problem.

To find out more about the towing capacity of the Toyota Sienna, just continue to read our article. It has the information you want to know about. 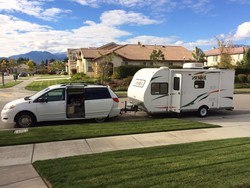 There are 4 models of this brand of car, the CE, LE, XLE, and the XLE limited. Each model is rated to be able to tow 3500 pounds. That capacity will limit the size of the trailer you will take on your vacation.

It is understandable why this vehicle tows so little. The minivan was not made for rough country living. The car’s purpose was more for city living, and the huge amount of family errands parents have to make.

There seems to be a little leeway on that total amount of towing capability. If you are driving alone, you may be able to add an extra 500 pounds onto the trailer as you would not be carrying any passengers.

But this can be risky, and pushing the boundaries is not a smart thing to do when it comes to towing trailers. The best way to tow a trailer is to keep to the maximum stated weight capacity. That way, you will not have any trouble if anything happens. 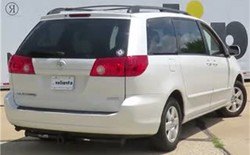 Up until 2007, there was a tow prep package that was standard on all Siennas. However, after that year, that tow package was reduced to being an option only. Some people have said that you need a better radiator installed in your car to tow anything.

Here is what you will probably need to install if you want to tow 3500 with your Toyota Sienna- heavy-duty radiator, heavy-duty fan, 150-amp alternator, and power steering oil cooler. All of this was standard on the 2006 model.

This is something that has remained consistent over the years. When Toyota made this car model, they seemed to have been stuck on the 3500-pound figure. That is the maximum towing capacity for this option as well. It may be boring, but Toyota likes it that way.

Its cargo capacity is 1285 pounds, but to reach that 3500-pound towing mark, you should install the towing package if it is not already installed by Toyota. The cargo capacity of this vehicle is roughly 150 cubic feet giving you plenty of room inside for supplies and kids. 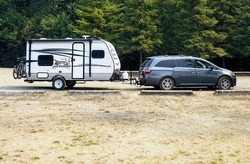 The 2005 model is just the same as the 2006 option. It can only tow up to 3500 pounds, and that is for both the standard and maximum towing levels. The curb weight of the vehicle is 4365 pounds.

The key to remember for both this model and the 2006 is that without the tow package, the vehicles are only rated to tow 2000 pounds. The good news is that the towing package as standard up until 2007.

After that, many dealers refuse to add the towing package to Sienna vehicles. You may need to add a transmission cooler as well.

Why Toyota says that the 2005 and 2006 can only tow 2000 pounds without the towing package is a curious thing. The towing package was standard on those vehicles, and the car was rated to tow up to 3500 pounds.

One thing you have to watch out for is that when the 2005 gets more mileage on it, expect to see some radiator leaks. Constant pre and post-trip inspections will help you catch the issue before it gets to be a problem. Some of those radiators are supposed to be self-healing, but it doesn’t hurt to keep an eye on it.

Can a 2005 Toyota Sienna Pull a Trailer? 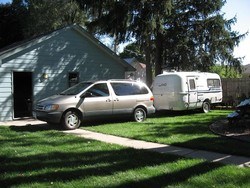 There is no problem with this vehicle pulling the right-sized trailer. The keywords are right size. While there may be a little leeway in the weight department, it is always best and safest not to exceed the rated amount of tow weight.

A 12 foot tandem cargo trailer with 2000 pounds of weight should be easy to pull for this car. However, you may experience a loss in mileage if you are towing a 5 by 10 foot enclosed trailer that is taller than the minivan.

Your results will differ depending on the type of trailer you are towing.

How do I Know if My 2005 Toyota Sienna Has a Tow Package?

It may not be mentioned in the paperwork since all Siennas from 2004 to 2007 had the engine components needed for towing installed by the factory. The only item that wasn’t factory installed was the hitch.

The key to knowing is in the terminology. The word ‘prep’ has to be included when talking about the Toyota tow package. The actual name is Toyota towing prep package, and some people may miss that detail and think their model doesn’t have it.

You may not be able to tow a 5th wheel or large travel trailer with this vehicle, but you can still use it to pull other types of trailers. Just keep the cargo and trailer weight down and within maximum rated figures.

The tow package is already installed and raring to go. You just have to select the right trailer.

Ford F150 Tow Haul Mode Guide (Not Working, When To Turn On)

Finding a Used Tow Dolly For Sale Craigslist (How To Buy)

What Is a Hitch Hog? Hitch Hog For Double Towing (Pros-Cons)